Converging cutting-edge tech alongside key players who drive the future of the entertainment industry, the bi-annual edition of FestForums® will descend on Santa Barbara later this fall, November 16-18 — Registration for the third annual gathering is now open via the FestForums® website. Just ahead of the bi-annual event, held in NYC and Santa Barbara each year, the creators behind the esteemed forum are rolling out their first announcement and unveiling a comprehensive program for those interested in learning how to maximize their success in producing festivals. 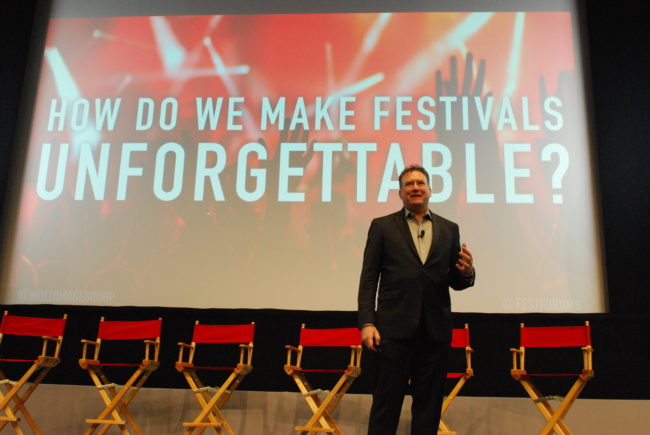 “Our commitment to empowering festivals with networking and educational opportunities is at the core of what FestForums® does best.” – Laurie Kirby, Co-Founder and Co-President, FestForums®

This year’s film-specific panels will discuss thought-provoking topics such as Solving Special Challenges Of Smaller/Niche Film Festivals and Lights! Camera! Releases! Filming Your Festival 2.0. Leading these conversations are seasoned, successful vets in the film and cinema realm: Founder and CEO of Revolution Media – C R Capers (aka Cha-Boogie), Gary Meyer, Eat Drink FIlms, entertainment lawyer William Hochberg of Greenberg, Glusker and the head of Rhino Films, and Stephen Nemeth to name a few.

In addition to invigorating panels, FestForums® will also be hosting exclusive screenings using state of the art cinematic technology provided by Cinetransformer. Attendees will relax and enjoy this one of a kind cinematic experience with complimentary movie theater snacks in an ultramodern “cinema on wheels”. Cinetransformer was recently recognized by the Golden Trade Leaders in Paris with a Golden Trophy in Technology and has partnered with leaders in the film industry such as Warner Brothers, Paramount, Universal, and Disney XD.

FestForums® is also excited to announce the screening of one film in the Emmy Nominated film series: American Epic with a Q&A featuring producer and writer Allison McGourty and director Bernard MacMahon. Executive produced by Jack White, T. Bone Burnett, and Robert Redford and directed by Bernard MacMahon; American Epic seeks to resurrect America’s lost musical history as it traces the evolution of blues, country, and more while reconnecting contemporary musicians from Nas to Willie Nelson recording techniques that have been long forgotten in today’s technology-driven world; giving the audience musical performances of a lifetime. In an interview with Rolling Stone, Burnett said of the film: “All of us have a common foe, and that’s forgetfulness – where you forget where you came from and who you are. We all appreciate that link to our history. We need that.