This was an exceptional applicant year with over 1000 artists (a 30% increase over the previous year) from 28 countries applying for 180 Official Showcase slots.

A 21-member international jury made up of festival directors and music industry professionals from the U.S., Canada, and abroad spent one month reviewing and scoring the applications. FAI places a priority on reflecting the full diversity of international folk music, and while scoring applications jurors are asked to consider how well the applicant helps broaden the view and offering of folk music for presenters, industry, and audience. 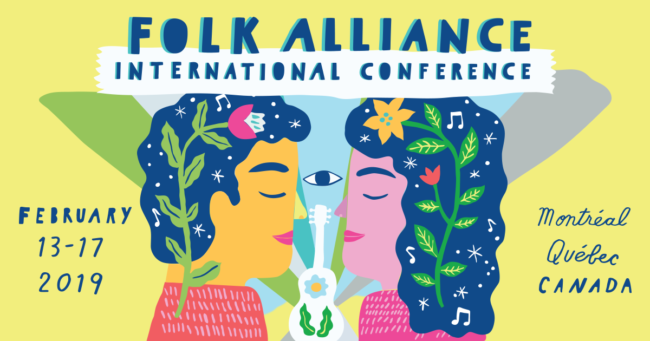 FAI is committed to diversity, inclusion, equitable representation in all programming. In compliment to ongoing efforts to prioritize this commitment, FAI has formally signed on to the PRS Foundation’s international Keychange initiative, a pioneering effort which empowers women to transform the future of music and encourages festivals to achieve a 50:50 gender balance by 2022. FAI achieved this goal of gender equity with the 2018 Official Showcases and aims to achieve it across all stages and programs in 2019.

Returning to Canada in 2019, the FAI conference theme, The Spirit of Creativity, is an exploration of the artistic process from inspiration to vocation and a collective conversation about innovation, collaboration, and spirituality in art. The 31st annual conference will be held February 13-17, 2019, in Montréal, Québec, Canadawhich is known for its vibrant music scene and public celebration of the arts. Additionally, the historic host hotel Fairmont The Queen Elizabeth, will be celebrating the 50th anniversary of John Lennon and Yoko Ono’s bed-in at the hotel where they wrote: “Give Peace a Chance.”