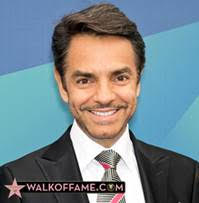 The Hollywood Chamber of Commerce is proud to announce that actor Eugenio Derbez will be honored with the 2,576th star on the Hollywood Walk of Fame on March 10, 2016 at 11:30 a.m. PST. The star in the category of Motion Pictures will be dedicated at 7013 Hollywood Boulevard in front of Marshalls. “The Hollywood Chamber of Commerce is extremely proud to honor one of the major Latino influencers Eugenio Derbez with a star on the Walk of Fame!” stated Ana Martinez, Producer of the Walk of Fame ceremonies. “Fans from around the world will be thrilled to see his star and have the opportunity to pose with it.”

Helping Emcee and Hollywood Chamber President/CEO Leron Gubler to unveil the star will be TBA. Actor, writer, director and producer Eugenio Derbez is one of the most influential creative forces in Latin America, and is the most recognized actor among the Spanish-speaking population in the U.S. His latest feature film “Instructions Not Included” became the most successful Spanish-language film ever in the U.S. and worldwide, and broke numerous box office records everywhere, earning over $100-million. Variety recently recognized him as the No. 1 most influential Hispanic male in the world.

Derbez, is the star of the soon-to-be released Sony Pictures film “Miracles from Heaven” opposite Jennifer Garner and Queen Latifah which will be released worldwide on March 16th.

Derbez is the star, writer, director and producer of some of the most popular TV shows including “Al Derecho y Al Derbez,” “XHDRBZ,” and “La Familia P. Luche,” which ran from 1994 to 2012 and is one of Univision’s longest running and most successful sitcoms ever. Reruns continue to air every week in Mexico and all over Latin America, and in the U.S. on Univision.

Derbez broke through to English-speaking audiences as a star on the CBS sitcom “Rob!”, and on Broadway in the play “Latinologues” that ran at the Helen Hayes Theater.

As a film actor,  Derbez has appeared in a number of successful and critically-acclaimed films including “Sangre de mi Sangre,” which won the Grand Jury Prize at Sundance in 2007, the indie smash hit “Under the Same Moon,” (“La Misma Luna”), Adam Sandler’s “Jack and Jill,” and “Girl In Progress,” with Eva Mendes. He recently wrapped shooting “Geostorm,” directed by writer and producer Dean Devlin (“Independence Day”), and voiced the role of ‘Rico’ in the upcoming animated feature “Underdogs”.

Derbez recently opened his Los Angeles-based TV and film production company 3Pas Studios. The company has a features first look deal with Lionsgate and Pantelion Films, and a first look TV deal with NBC Universal.  As the top comedian/ actor/ director with cross-cultural appeal, Eugenio has collaborated with DishLATINO in the creative development of culturally-relevant Latino advertising and serves as the brand’s spokesperson.

Derbez’s work as a philanthropist comprises of animal rights, elderly, disabled children’s care, and cancer awareness. He also donated more than $4-million from his earnings of the movie “Instructions Not Included,” to help victims of hurricanes in Acapulco, where most of the film was shot.

ABOUT THE HOLLYWOOD WALK OF FAME www.WalkOfFame.com

The Hollywood Walk of Fame is an internationally-recognized Hollywood icon. With approximately 24 star ceremonies annually broadcast around the world, the constant reinforcement provided to the public has made the Walk of Fame a top visitor attraction. The Hollywood Chamber of Commerce continues to add stars on the Walk of Fame as the representative of the City of Los Angeles. The Walk of Fame is a tribute to all of those who worked diligently to develop the concept and to maintain this world-class tourist attraction. The Walk of Fame is open to the public. No paid admission or assigned seating at star ceremonies.It is understood that the cost of installing a star on the Walk of Fame upon approval is $30,000 and the sponsor of the nominee accepts the responsibility for arranging for payment to the Hollywood Historic Trust, a 501(c)3 charitable foundation. The funds are used to pay for the creation/installation of the star and ceremony, as well as maintenance of the Walk of Fame. Download the official app for iPhones and Android devices at http://officialhollywoodwalkoffameapp.com