Eljuri at the Gibson Showroom: exuberant, exciting, explosive and far larger than life 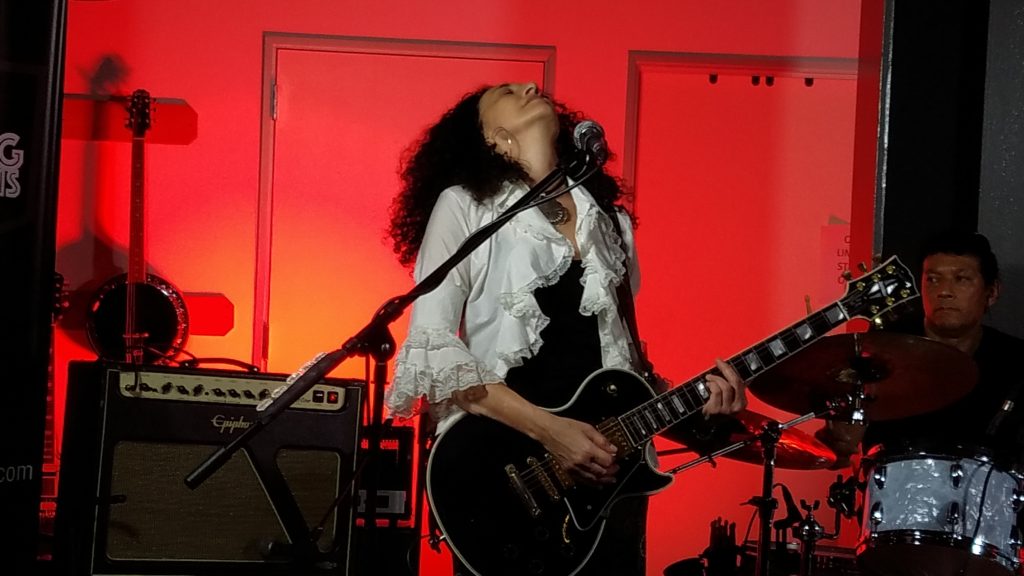 With the energy of a 20-year old and the chops of one of the nation’s most seasoned rock guitarists, Eljuri blew the roof off the Gibson Showroom in Beverly Hills at a special Girls RockLA performance Thursday night, produced by The Living Sessions.  It wasn’t just the guitar riffs – although they were incendiary, and it wasn’t just her singing – although she growled and soared and dug into our ears and our brains with best the best of them.  It was her presence – the there that Eljuri is:  exuberant, exciting, explosive and a woman who knows  herself, where she is going and how very, very good she is.

In LA for a quick stop, Eljuri gave 1000% to the crowd who managed to get into small but prestigious venue.  Ripping through ten songs from La Lucha,  her new album released this month,  that  ranged from the anti-gun-violence hard rocker “Bang Bang” to the more melodic (but still rocking) “Salvame”. Working with an abbreviated band  from her native New York, consisting of Johnny Pisano on bass and Alex Alexander on drums, Eljuri (whose full name is Cecelia Villar Eljuri), filled the guitar-strewn showroom with a sound that spilled out across the street to the Civic Center.

Eljuri is a first class entertainer as well as stellar musician. The performance was bi-lingual and the music was interspersed with stories from her days in punk bands at New York’s famous (and now gone) punk club CBGBs, as well as her travels and some of  her social views.  With a mile-wide smile, twinkling eyes, wild curls and long rangy body and arms that easily encompass not only her large Gibson Les Paul guitar, but seemingly everyone on stage and in the room, Eljuri is far larger than life.

It is no wonder she is such a fascinating individual as well as a superb musician. Born in Ecuador but raised mostly in New York City, she easily straddles both Latin and gringo cultures and many musical genres. She grew up in the New York punk scene and played with English language bands like the early alt rockers, the Trouble Dolls. She started playing music as a young child with the blessing of her parents, her father Paco Villar, the Ecuadorian broadcaster, and her songwriter mother, Olga Eljuri de Villar.  They encouraged her to learn piano at the age of five and by 12 years old she had started her own rock and roll cover band. She decided to learn guitar at 14 and started writing punk and rock songs. She loved  playing in English language bands but her Ecuadorian heart (and manager Paola Romano) called her to concentrate on Spanish-language writing and rock en español.  She formed  her own band, Grupo Fiesta (with Cindy Padilla on lead vocals), and in 2006  went solo, releasing two solo albums and touring simply as Eljuri (pronounced “El hoodi”). La Lucha is her third album.

GirlsRockLA’s program at the Gibson Showroom was magical, not only for Eljuri but also for the warm love songs of Valise Blue, up from Tijuana, and LA’s stunning singer/songwriter Nancy Sanchez. Congratulations to Julieta Isela of  The Living Sessions for nearly a year of shows, each one with increasingly more impressive talent and organization.  The Living Sessions have become a treasured institution in the LA music scene, both in English and Spanish and are beginning to branch out to other cities.  But Thursday night truly belonged to Eljuri. The intimacy of the Gibson Showroom allowed us to see up close the subtlety of the finger movements that create such pyrotechnical sound and enjoy the force of her voice and personality. But  having been up close, I can’t wait to see Eljuri with her full band at a venue large enough to contain her. That will really be exuberant, exciting, explosive and far larger than life. 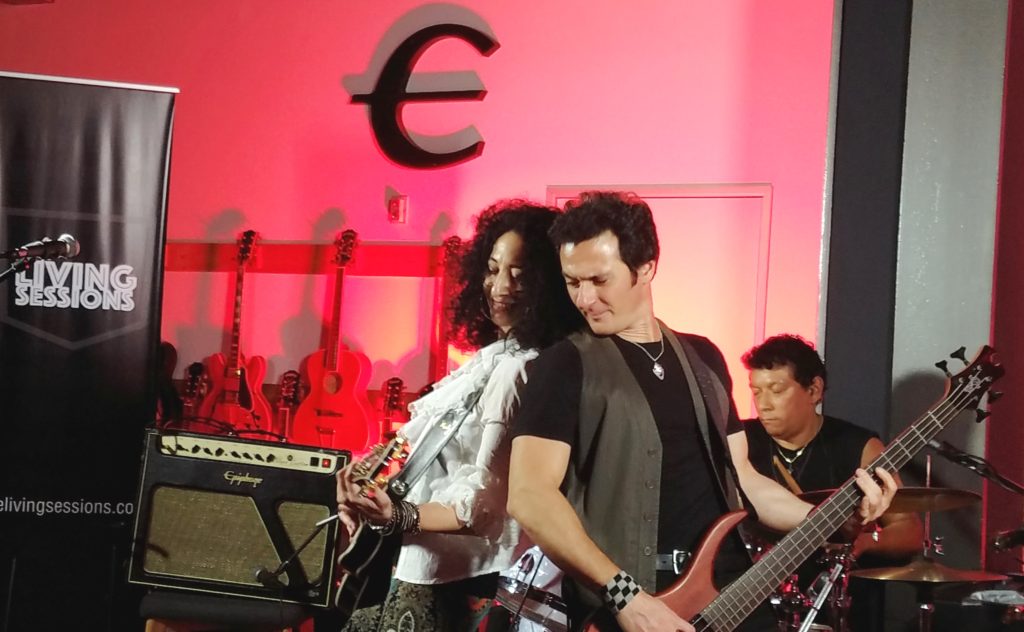