Diamante Electrico. Conquering the US because they Just. Play. Music. Together.

Diamante Electrico. Conquering the US because they Just. Play. Music. Together.

Home » Collective » Diamante Electrico. Conquering the US because they Just. Play. Music. Together. 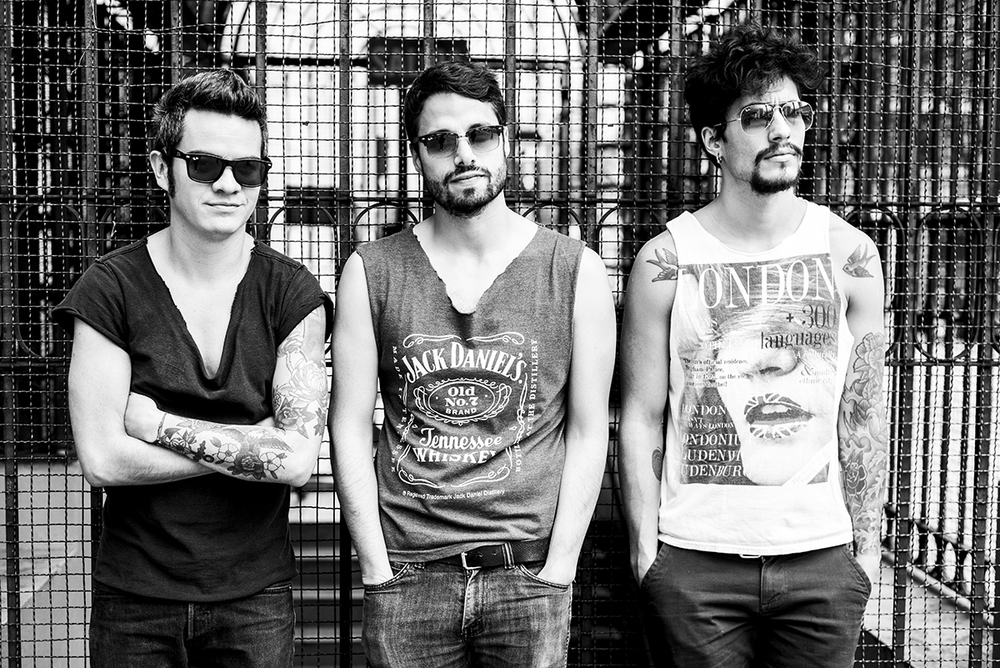 The three members of the Colombian indie rock band Diamante Electrico slid into a leather booth at LA’s venerable mid-town rock club The Mint and said they were here to conquer the American music market.  They had just wrapped up a mic check and the sound engineer told them they could kick back after they take photos of their settings and connections.  The trio had previously spent the afternoon at the Gibson Guitar Showroom in Beverly hills rehearsing and they were ready to lean back and talk.

This was their second visit to Los Angeles. Their first was at the Cultures Collide event last year where they played to a jam-packed crowd in a small bar in a SilverLake restaurant. No matter. Whether it is a lounge in Silverlake, the Mint in West LA or Bogota’s El Campin stadium before 40,000 people as special guests of the Foo Fighters, they live up to their name – “electric dynamite”.

The trio – Juan Galeano, Daniel Álvarez  and  Andee Zeta – knew exactly why they were there and what they hoped to accomplish: have fun and advance their strategy for  “conquering the American market,” in Galeano’s words.  It is a slow strategy because their mission is also to have fun while doing any conquering.  They have already been through the frantic work phase of career building with 250 gigs over 4 years, mostly in Latin America.  That built them an audience and a level of notoriety that attracts crowds and media where ever they play.

But not so much notoriety that they cannot be themselves, browsing flea markets for their beloved vinyl –  “we love vinyl but we spend a ton of money on vinyl” groans Galeano when asked about the decision to release of their last album as a record.

Groans aside, the album re-release and their inveterate browsing through flea markets and used record stores is the essence of Diamante Electrico – a priority on the fun of  music. First and foremost, they love playing together and will do whatever it takes to, in Galeano’s words,  “Just. Play. Music. Together.”  They started out as a pastime and became a band.

“Yes, I am the one who said music was an accident, not a career” blushes Álvarez;  then he quickly adds with a grin, “but it has to stop being an accident.”

It was no accident that Diamante Electrico’s second  album was awarded a Latin Grammy in 2015 for “Best Rock Album of the year” a unusual honor for a relatively new band.   Álvarez’s command of the lead guitar is scary it is so good.  Galeano, whose background includes rock, metal and jazz, delivers bass lines like bloodlines and vocals that could fit the music in any topline rock band in the world. And Zeta’s drumming (not to mention his bare-chest and tattoos) moves like an atomic powered, precisely constructed machine that roars gorgeously through beats, fills and solos.

This did not come easy.  “We were all doing different things,” says Galeano, “Daniel was a suit working in an office.” Andee chimed in, “we had been playing with people for 15 years and getting nothing out of.  So we said let’s make a band and just play.  We realized in the end that this is what it is all about  – the music, the songs.”  When they moved to next level to record and distribute the songs, they were stymied by a lack of money or a label so they innovated. “We told people if you want the record you have to help us and we became the first  band to crowdfund  a major record release in Colombia. We raised $5,000, which is a lot for Colombia,”  Galeano said proudly. That album, Electric Diamond,  caught the eye of fans and the industry, both inside and outside of Colombia and the world opened up a bit wider for them. Diamante Electrico was no longer an accident.

More important they caught the wave of American Latino Music now building throughout the Americas, fueled by  immigration, political and economic change and the vast energy of young artists raised in a global music world.  “ I left Colombia in 2000 because I wasn’t challenged and the country was in a very strange place; there weren’t really any places to play”, said Galeano, explaining his musical odyssey through rock and metal and jazz which took him to Holland and then back to Bogotá.

Their music, and that of dozens of other bands blending music from throughout the Americas, springs from the same source, something the trio feels deeply. When asked if they consider their music classic American rock and roll, Álvarez replied, “I don’t want to be pretentious in saying this, but everything clearly comes from Africa. It is black. Africa went many different ways.  A big part of where it went is Latin America, so we meet ourselves in those roots. We can call ourselves Latino rock without playing congas  and things like that, but we are playing black-rooted music, which is basically rock and roll that was pretty much invented in the US, but we also have a lot of that from elsewhere, including from Latin America.”

Later that evening they demonstrated exactly what they meant from the Mint’s stage to an audience that was so packed getting to the bar was out of the question. They moved through high energy, high octane classic-feel rock songs in English and Spanish, but with their special flavor.  Álvarez worked soaring miracles on the guitar and then faced off with Galeano, trading note for note as they moved higher and faster in each measure. Zeta became a blur, shirt off, grinning and wincing, recalling the energy of Neil Pert of Rush or Veronica Bellino of Jeff Beck and Halo Circus.

Diamante Electrico is a different take on American Latino Music.  They differ from the bands coming from Colombia who blend cumbia and rock – always a good thing, but not what Diamante Electrico do.  They turn rock back on itself, attach a 1000-volt current to it, add some Colombian spice and make it accessible to US audiences regardless of language. If they succeed in “conquering the American audience” they will do so because they instinctively and explicitly play the music that was born  here, but whose DNA is the same as the music of all the Americas.  And because they like to Just. Play. Music. Together. 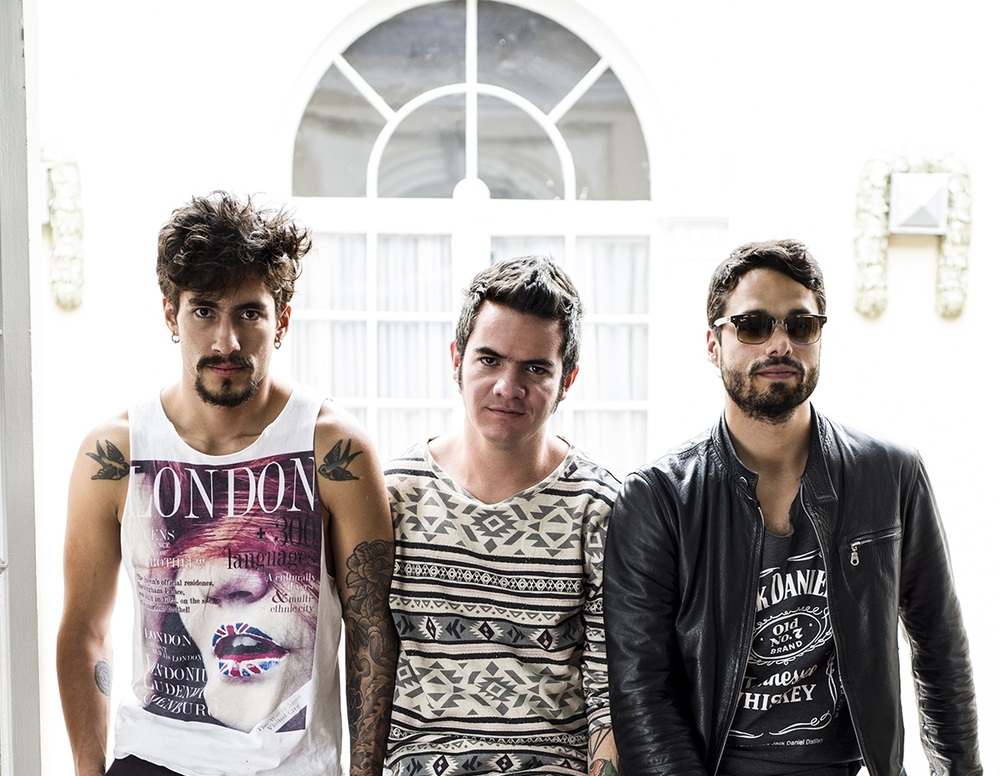 The albums “B” and Electric Diamond and the new single “Combustion” are  available on iTunes, Amazon.com and Spotify