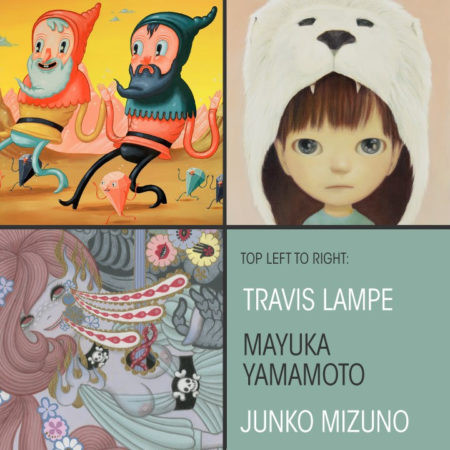 Junko Mizuno is motivated by the pure pleasure of creating art, which she uses to celebrate the power of women and creates a universe for them ─ full of energy, both positive and negative.Mizuno’s upcoming show at CHG, entitled Soma, encapsulate the growth, maturity, and finality of the human existence. The definition of “soma” is 1: the body of an organism 2: all of an organism except the germ cells 3: cell body. She shares, “The series is about celebrating life, death and body. I’m turning 46 this year and I feel my body is changing as I get older. In the last five years or so, I’ve seen my friends having serious illnesses (some of them passed away), many of my friends got pregnant and had babies, some lost their parents, and I see my parents getting older and weaker as well. All of these led me to think more about life, death and body, and it’s reflected in this series.”

In Mayuka Yamamoto’s upcoming show, entitled Animal Boys, she reflects on her childhoodand explores ideas of natural instinct and anxieties, related to growing up. She prefers to leave her “animal boys” (children dressed like animals) and enigmatic expressions against soft, pale backgrounds, a mystery to her viewers.

She shares, “‘Why draw a child dressed in an animal costume?’ is a question I’ve never been very good at answering because it’s simple: ‘It’s just something I wanted to draw.’ When I hear that question, I try to think about it from my starting point and ask myself: ‘What do I struggle for and what have I created up until now?’

If the viewer thinks my paintings portray ‘normal’ children, or a child who refuses to grow up, or a boy who yearns to be animal, or a boy who’s just wearing an animal costume; I can accept these viewpoints. Because, in fact, I’m trying to create work that has many meanings and is ambiguous to the viewer. Then, I realized that I don’t have an answer and I don’t want an answer. Everything is ambiguous, I want my work to exist like that.” 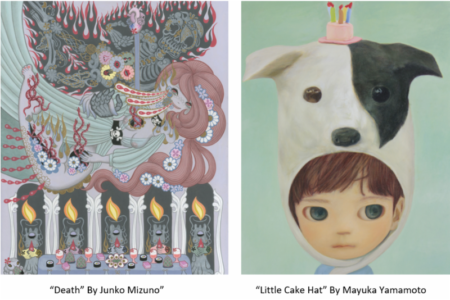 Travis Lampe’s new show, entitled Tales Best Left Untold, is inspired by storybook tales that you heard as a child with a boozy twist. Lampe shares, “You know the magical storybook tales you loved as a child? These aren’t those, at all, really. I prefer to improve the old tales with the addition of way more punching and quite a bit more booze. If you walk away from my work having gained insight into the meaning of friendship or learned some sort of lesson about yourself, you should probably look again, this time paying closer attention to all the punching and booze. Also, in painting for this one, I came to the conclusion that Mother Goose was, for all intents and purposes, a witch. Am I the only one who didn’t already know this? I’d never thought about it before, but it seems obvious now. I feel like an idiot. For this show, like all the others, I painted things that make me laugh. There is meaning hidden in there, I suppose, and even a kind of truth – look around, the world right now is bananas – but examining it too closely would ruin all the fun, I think.” 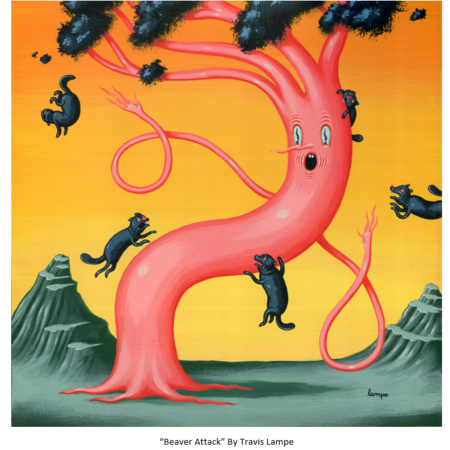 The group show opens Saturday, February 23 from 7pm – 11pm in Gallery 2. The reception is open to the public and the exhibit will be on view through Saturday, March 30. The space is open Tuesday – Saturday, 12pm – 6pm. Corey Helford Gallery is located at 571 S. Anderson St. Los Angeles, CA 90033.

Junko Mizuno
Having grown up in Tokyo, Mizuno is a self-taught artist recognized for her unique visual iconography of powerful and often sexy women. Although her art refuses to be categorized, much of it is based on Japanese pop culture from the ’70s and ’80s, with the source of her inspiration stemming from fetish art, folk art, religious art, psychedelic art, pin-up art, advertising art, vintage toys, fashion, comic, food, nature, movies, TV shows, video games…almost everything that surrounds her. Currently residing in San Francisco, she’s constantly working on new comics, paintings, illustrations, and product designs ranging from toy figures to T-shirts. Her work has been featured in stores, museums, and fine art galleries around the world.

Mayuka Yamamoto
Born in 1964 in Okayama, Japan, Yamamoto received her master’s degree at Tokyo’s Masashino Art University in 1990 and joined the Japanese Government Overseas Study Program for Artist to continue her studies in London until 1999. Her works have been shown in several solo shows held by Japan’s Gallery Tsubaki and her 2007 solo show, titled Deer Boy and Other infants, was hosted by Canvas International Arts gallery in Amsterdam. She also participated in group shows at the Korean International Art Fair (2004–2007) and Young Japanese Painting (2007, Amsterdam).

Yamamoto is known for her oil paintings portraying children in animal suits or possessing animal features, to reveal their inner world. Like a protective armor in response to their emotions and psychological state, they seem to instinctively hide behind a second skin in the form of animal costumes or some other defensive physical animalistic features. In some of the pieces, Yamamoto paints settings inspired by nature, further enhancing the contemplative space into which the subject seems to find solace in the dreamlike natural habitat.

Travis Lampe
Lampe grew up in a small town in Kansas. After earning a degree in Graphic Design, he took a job in advertising as an art director in Chicago. While making ads for breakfast cereals and well-known purveyors of inexpensive furniture over a period of several years, he secretly began “developing his illustration style,” which is not the same thing as “procrastinating.” Finally, when he felt the world was ready, he began his slow explosion onto the art and illustration scene, as it were. He currently lives and works in Chicago.

Corey Helford Gallery
Corey Helford Gallery (CHG) was first established in 2006 by Jan Corey Helford and her husband, television producer and creator, Bruce Helford (Anger Management, The Drew Carey Show, George Lopez, The Oblongs) and has since evolved into one of the premier galleries of New Contemporary art. Its goals as an institution are the support and growth of young and emerging, to well-known and internationally established artists, the production and promotion of their artwork, and the general production of their exhibits, events and projects.

After nine years in Culver City, CHG relocated in December 2015 to a robust 12,000 square foot building in Downtown Los Angeles, where it continues to host exhibitions within the heart of the city’s art community. The current space boasts three separate galleries, each of which house individual artist and group exhibitions, whereas the main gallery offers 4,500 square feet, providing total immersion for its attendees. New exhibitions are presented approximately every five weeks.

Follow the links below for more info and an upcoming exhibition schedule.