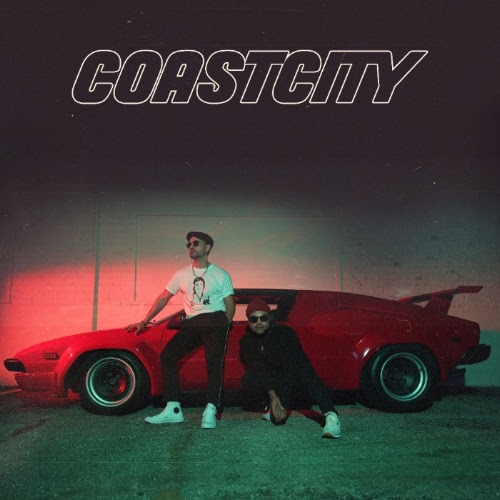 Produced, engineered and written by the duo, the EP falls into the genre “Caribbean Soul” which they created

On the production front, COASTCITY has been working and vocally producing heavy-hitters such as Beyoncé, J Balvin, Anitta, Nicky Jam, Residente, Karol G, Prince Royce, Lele Pons and CNCO to name a few

Dubbed the Latino N.E.R.D., COASTCITY has been making noise since their inception last summer garnering 3 Latin Grammy nominations and1 Grammy nomination for their production and engineering work with Prince Royce and Shakira and placing a handful of songs that charted in the top 25 of the Latin Billboard charts.

On the music side, the duo got invited to perform at major events such as Marc Anthony’s annual Maestro Cares Gala alongside Maluma, Miguel Cotto’s last fight at Madison Square Garden to sing the Puerto Rican national anthem as well as the esteemed Hispanicize conferences in both Los Angeles and Miami.

In addition to making Pandora’s prestigious 2018 Latin Artists to Watch list, the duo has continually landed placements with major media in both the Latin and general market spaces. Their three singles released to date, “Noches y Mañanas,” “Desconocidos,” and“Besos Pesos” featuring Girl Ultra have been added to numerous playlists across all digital streaming platforms amassing half a million streams.

2018 looks promising for COASTCITY with the release of their highly anticipated self-titled EP released through their label EMPIRE includes featured artists such as:  Latin Trap’s most promising artist Álvaro Díaz, Mexican R&B diva Girl Ultra and Angolan R&B artist Anselmo Ralph as well as renown songwriters such as Claudia Brant, Prince Royce, and Erick Michael Estrada from O-Town.  Recently signing to Atomic Music Group for booking and having a successful L.A. debut at the iconic Echoplex in May, the duo is gearing up to tour California and other major cities in the U.S. this summer kicking off with a show in NYC in July followed by the Levitt Pavillion with Sotomayor July 13th in Los Angeles.

Track by Track Breakdown by COASTCITY

Pa La Calle (Hit the Street) – This was one of those situations where the melodies and lyrics spilled out in a matter of 20 minutes. The production came after when we matched the sounds to the lyrics. It’s exactly what you want to play on your way to the playa (beach) and then from the playa (beach) to the club!

Desconocidos (Strangers) – This song was born from a B1 vintage Organ we bought at the Salvation Army for $150. The combination of the chord progressions drove the melody to flow. The premise of the song is about 2 strangers breaking the ice and vibing in a playful cat and mouse chase. This song was the nucleus of the EP which we built around.

Besos Pesos feat. Girl Ultra (Kisses Dollars) – This idea started in our studio in Miami and was later finished in a studio we love to work out of in LA. We wanted to create a vibey song to follow our 2nd single “Desconocidos.” The song was inspired by people who find themselves paying for love and about the women who chose this career path for either pleasure or necessity. It’s a song about female empowerment. The concept for the video is dripping in Miami Vice. We asked the sexy Mexican R&B diva Girl Ultra to be on the track. Her sultry vocals was the cherry on top.

Con La Luz feat. Anselmo Ralph (With the Lights On) – This is our take on Caribbean Soul / R&B. We really wanted to raise the temperature in the room with this song.  It is driven by a smooth bass line and baby making melodies. We were producing Angolan RnB crooner Anselmo Ralph’s album at the time and invited him to join us being that he’s on a kizomba R&B vibe that really complimented the mood of the record.

Noches y Mañanas (Nights and Mornings) – This song was birthed in LA.  We co-wrote this with award winning songwriter Claudia Brant whom we’ve been collaborating with for over a decade.  The fusion of Caribbean beats mixed with distorted guitars and soulful rock vocals really makes this song a COASTCITY one of a kind. This song really paved the way for our sound and the rest of the EP.

Countach – If COASTCITY was a movie, what would the theme song of the soundtrack be? That was the vision when we started creating this record.  We live in Miami but created this in LA so we really wanted to paint the picture of a sexy coast to coast drive during a sunset with flashing city lights. We wanted this to live more in the 80s so we stayed true to authentic analog synths like the Juno-60 & Prophet.  We co-wrote this one with our brother Erik Estrada, from the group O-Town.

Desconocidos (Remix) feat. Álvaro Díaz – We’re always listening to new music to find inspiration in the new wave of talent emerging in the Latin space. We’ve been following Alvarito for a minute and seen how he created a dope movement for the culture in Puerto Rico. His approach to be a trendsetter in the Latin urban world not only musically but visually is what really attracted us to him.  We have a lot of friends and colleagues in common so one day we asked him if he’d like to jump on the remix and there it was!