COASTCITY at the Echoplex in LA:  language and musical divides disappear - Gypset Magazine

COASTCITY at the Echoplex in LA:  language and musical divides disappear

Home » Culture » COASTCITY at the Echoplex in LA:  language and musical divides disappear

There is no other way to say it: COASTCITY blew away the Echoplex Thursday night.  The Grammy-nominated multilingual Puerto Rican duo of Danny Flores and Jean Rodriguez  brought pure fun to the spacious stage of one of LA’s best sounding clubs to an audience completely at home with the band’s  parallel languages and music forms. They also brought a full band complete with horns.  And if that wasn’t enough, they brought rapper Álvaro Diaz, who joined them onstage for two songs before his own set.  The result was a solid set of ten songs – some new, some familiar – that kept fans clapping, singing and screaming “otra vez” for an encore (they got it, but more on that later).

Flores flashed his mischevious grin behind the keyboard as they opened the act with a new song, “Countach”.  Rodriguez moved back and forth across the stage, jumped up and down, called out greetings, pumped his fist  to the audience and generally poured electricity into an already energetic room.  Moving on to their hit “Besos Pesos”, Rodriquez put downs the guitar and slipped into heartthrob mode as the audience sang along with him.  Another of the duo’s hits, “Noches y Manana”, followed as Rodriquez picked up his signature blue electric guitar and the horns wailed.

Rodriguez took a break to talk to the audience in English and Spanish about their tour and their music. The younger brother of the Latin superstar Luis Fonzi, Rodriquez grew up bicultural and bilingual when his family moved to Orlando from Puerto Rico.  He started singing in a school choir, shadowing the footsteps of his trumpet-playing grandfather and his music teacher grandmother. His father collected and constantly played jazz and salsa  records – enough for a museum, according to Rodriquez, who actually started playing the trombone in middle school. But his love of Latin rhythms and R&B took hold and he started singing in high school for real. The rest is history – his hit song “Desconcidos”, working with Danny Flores on projects for Beyoncé and J. Balvin and now COASTCITY. He and Flores linked up on their self-titled debut album, COASTCITY,  producing music they call “Caribbean Soul” – a coastal vibe with a city attitude.

That attitude was on full display in the “Mashup” and “Scar Collecta” that followed “Noches Y Manana” and then completely took over with their hit song “Desconocidos” when Álvaro came on stage and opened the song with an urgent, heartfelt rap in Spanish. Both Diaz and Rodriguez got down on the edge of the stage with the fans, singing directly to them, making the audience lovingly their own. Another new song followed,  “Purple and Prince”, with guitar and keyboard solos and a rousing crescendo. 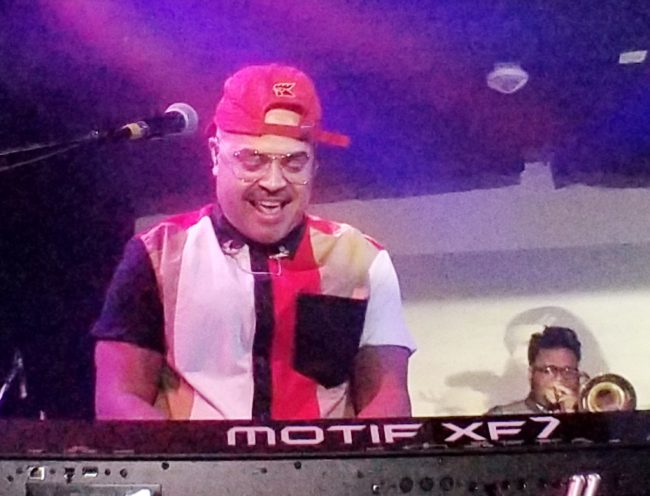 Rodriquez moved back to the edge of the stage to charm the front row fans (who were frantically taking advantage of the closeness to shoot cell phone videos) in “Con La Luz”, moved back to hip hop mode with a Latin-beat heavy “Wild Americanos” and  went out with a bang, shouting “Como” and launching into “Pa La  Calle” with the audience singing along.  Rodriguez wrapped up with more gratitude to the audience, switching back and forth between English and Spanish , drawing cheers and cries of “otra vez”.

There was an “otra vez” and t it was a happily received surprise.  In keeping with the band’s bilingual personality, the final song was not a Latin anthem, but Michael Jackson’s 1982 hit “Billie Jean”, delivered with a Spanish intro, many laughs, and full audience participation.

Headlining a night that included the local bands Cometta and Fabriq plus the final set by Álvaro Díaz,  COASTCITY ramped up the energy even more than their performance at Hispanicize last year in Los Angeles which turned me on to them. But it was their easy cultural blending that made the night – and makes them – a special kind of animal. More and more bilingual bands are now on the mainstream music landscape – Chicano Batman, La Santa Cecelia, Nancy Sanchez — even the venerable Los Lobos, to name a few.  COASTCITY  is consciously expanding that movement – they are self-aware of how they directly address audiences from both sides of the language divide, not only in words, but in the range of their music.  Their ability to shift from “Con La Luz” to “Billy Jean”, from rap to R&B, rock, and Latin beats give them an appeal that moves them out of the “not sure where they belong” pigeonhole to “everybody loves them”.  The result is that,  in their hands,  language and music divides disappear.  No matter what language you speak, COASTCITY is at home with you and you will be at home with them.