Today, undocumented immigrants face countless daily challenges, including obtaining access to affordable health care. At Puentes de Salud health clinic in South Philadelphia, volunteers address this problem by serving uninsured Latino immigrants who have nowhere else to turn and are increasingly reluctant to seek care in the current political climate. Spotlighting the bonds between the doctors and their patients, the timely documentary CLÍNICA DE MIGRANTES debuts MONDAY, SEPT. 25 (10:00-10:40 p.m. ET/PT), during Hispanic Heritage Month, exclusively on HBO. The film will also be available on HBO Latino, HBO On Demand, HBO NOW, HBO GO and affiliate portals.

From Maxim Pozdorovkin (HBO’s “Pussy Riot: A Punk Prayer”), CLÍNICA DE MIGRANTES goes beyond the politicized rhetoric to show the faces of real people in the middle of the immigration debate, asking if America can continue withholding basic necessities from an estimated 11 million undocumented immigrants. Underserved, undocumented immigrants with medical issues often end up in emergency rooms as a costly last resort, and can be charged thousands of dollars for little more than an aspirin.  Puentes de Salud and similar clinics across the country are trying to address this issue and provide care for these men, women and children.

CLÍNICA DE MIGRANTES paints a compassionate portrait of patients at Puentes de Salud, many of whom left their families behind to perform physically exhausting labor in America for meager wages, and follows the tireless staffers who treat around 10,000 patients each year with limited space and little funding. As Puentes plans a larger facility to accommodate rapidly increasing demand, executive director Dr. Steve Larson and his team must find a way to keep their practice running despite obstacles at every turn.

Dr. Larson manages both the business and medical sides of the clinic, and realizes there are limits to the services Puentes can provide. Needing increased funding, he reaches out to local restaurants that provide work for immigrants, though getting unconditional support sometimes proves difficult. Similar roadblocks arise when patients need more advanced medical help. In one instance, Dr. Larson tries to call in a favor from a local surgeon to help someone who has had a colostomy bag for three years, but the answer is clear: Unless the man has insurance, it’s not going to happen.

A house cleaner suffers from back pain that is aggravated by her strenuous work. She begins to cry when she recalls her son telling her how proud he is of her, stating, “And just like that, with the pain, I go to work.”A pregnant teenager is examined by Dr. Jack Ludmir, a founder in charge of prenatal care. Seeing 52 patients in one day, he factors emotional care into the physical services he provides, emphasizing the “moral and ethical obligation” to immigrants. It’s often too risky for Puentes’ patients to report potentially dangerous situations, so the clinic must serve not just as healthcare providers, but as supporters, friends and even a surrogate family. As he tells a Honduran woman separated from her children, “We will not abandon you.”

Discharged from the hospital with terminal leukemia, Mery prepares to return home to Honduras, where she can be with her family for what will likely be her final days. The incredible power of Puentes is evident in Mery’s parting moments, when she says to Dr. Larson, “My heart says I will come back…I know that I will see you again.” As it opens a new permanent location, Puentes is confident it can serve as a beacon of hope in a difficult landscape. Though the United States continues to relegate undocumented immigrants to the margins of society, the country must also confront the fact that this is, in the words of Dr. Larson, “the new face of America.” 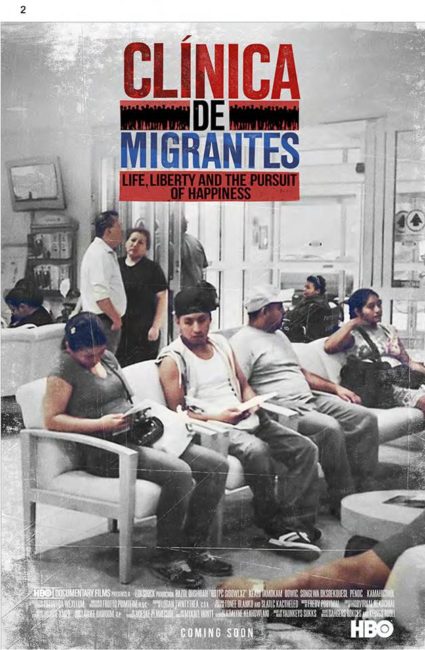