Can Wine Truly Be A Guilt-Free Beverage? - Gypset Magazine

Can Wine Truly Be A Guilt-Free Beverage?

Home » Bon Vivant » Can Wine Truly Be A Guilt-Free Beverage?

Wine sales in the U.S. totaled $62.7 billion in 2017, with 2018 enjoying steady growth in one California’s strongest industries. According to Wines & Vines and BW166, around $41.8 billion of sales made were of domestic wines, a 2% increase from the previous year. Part of the reason for the ever-increasing popularity of wine is its health appeal. Unlike spirits and liqueurs, wine is fast coming to be known as an important way to keep heart disease and other health problems at bay, in the most pleasurable way possible.

The secret lies in the polyphenols

A study published in February this year by the American Chemical Society found that wine the powerful compounds called polyphenols can boost our oral health by interacting with bacteria in the gut and fending off disease-causing bacteria that cause cavities and gum disease. The study looked into two polyphenols in particular (caffeic and p-coumaric acids), finding that they wield a similar effect to probiotics, which promote gut health. The magic happens when we begin digesting polyphenols in the mouth, soon after we take our first sip.

Low to moderate consumption of red wine can delay the onset of neurodegenerative diseases such as Alzheimer’s and Parkinson’s. Scientists studied the neuronal effect of metabolites left by wine after it passes through the digestive system. Interestingly, they found that these metabolites protect cells from dying owing to stress and they are active at different points in the cell signaling process. 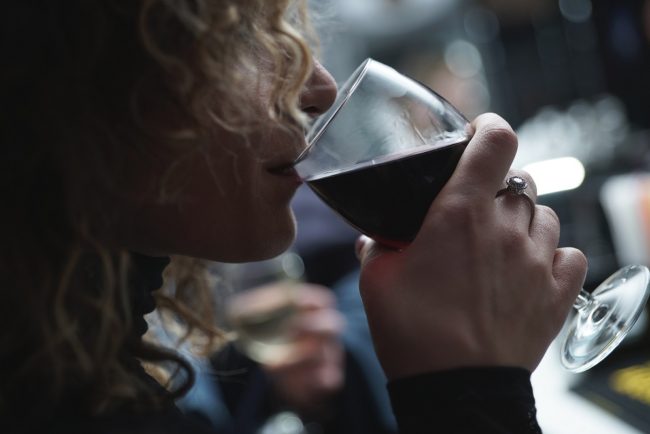 Previous studies have shown that resveratrol (a powerful antioxidant in red wine) can promote better heart health and stave off inflammation, with moderate consumption linked to a reduction in the risk of dying from heart disease by 30%-50%. Moreover, a new study published in February 2018 shows that resveratrol can also promote healing and prevent inflammation and blood clotting during heart stent surgery. Of course, the process is surgical and doesn’t involve drinking wine, but it does show the powerful effects that are contained in this beverage.

A case for organic wine

If you really want to make the most of the beneficial effects of wine, make it red and go organic if you can. It is fascinating to think that our ancestors enjoyed traditional wines which were far healthier and, dare we say, tastier, owing to the absence of pesticides and other chemicals commonly used in modern crops. As noted by Dr. Axe, modern wine is often “made of much more than just grapes. In fact, some conventional wines can contain up to 70 added ingredients — including unnatural yeasts, preservatives, food dyes, residual pesticides, added sulfites, and sometimes added sugar.” Check your ingredients list, go for local producers if you can, and ensure your choices are as natural as possible.

One thing that research has shown is that when it comes to wine, you certainly can have too much of a good thing. Heavy drinking has been linked to liver a plethora of health problems, particularly to liver disease. Keep it to one or two glasses a day and if possible, choose red over white wine.

Drinking wine is not only pleasurable, it also helps you fight free radical damage, improves cholesterol levels, improves your heart health and helps battle diabetes, obesity, and weight gain. When shopping for wine, try to enjoy organic varieties when you can and exercise moderation to stay fit and boost your general health.