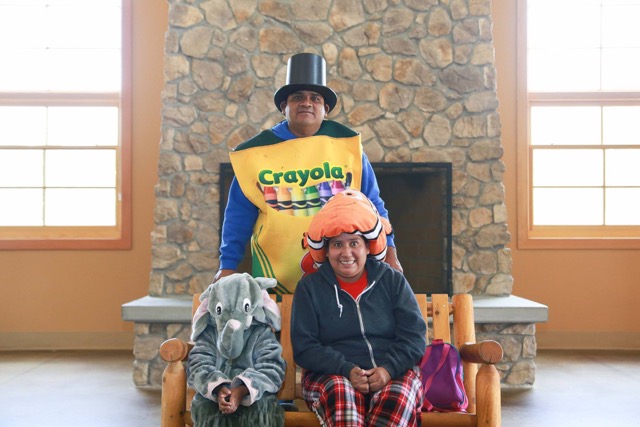 Natalia was only 16 months old the day she fell so hard her parents decided to rush her to the hospital.  Though falls at that age are common, it was unlike any other fall because Natalia had an intense fever soon after.  They rushed her to White Memorial Hospital in Boyle Heights where they took blood and ran other tests to see why Natalia was having such a strange reaction.  What came next, the Blancos could have never prepared themselves for.  Arely, Natalia’s mom, recalls a team of six doctors stepping into the room and saying, “your daughter has Leukemia.”  Arely said in that instance her whole world came crashing down.  She doesn’t remember much else but the doctors walking out of the room as she started to scream uncontrollably, because for her, cancer meant a death sentence for her baby.

The Blancos didn’t have much time to recover from the shock of the diagnosis.  The decided to have their daughter treated at City of Hope.  Natalia spent the next two years of her young life undergoing chemotherapy, radiation, and a bone marrow transplant.  Arely recalls early on how Natalia stole the hearts of her medical team.  She said it’s not generally allowed to have birthday parties at the hospital, but come Natalia’s second birthday the hospital staff and church friends came together to celebrate her birthday.  It was these moments of light in a time of darkness that really kept the Blancos going.  Arely shares that it truly is a miracle that their daughter is alive today.

By the time Natalia was in remission, the Blancos were a ball of nerves having just endured the most traumatic experience of their lives.  Arely says Camp Ronald McDonald for Good Times came into their lives when they needed it most.  The Blancos are monolingual Spanish speakers, so they were thrilled to hear that Camp had a family camp, Campamento Familiar, that addressed their linguistic and cultural needs.  Arely said her first time at Camp was the first time in three years that she was able to take a deep breath and begin to feel like herself again.  Arely shares, “Camp changed our lives.  We found people who understood what we had just been through.  We cried together, laughed together, we lifted each other up.”  She also shares how much joy it brought her and her husband to see their daughter playing and being a kid—“it was a dream come true.”  The Blancos wish they had the resources to give back to Camp.  They show their appreciation every Campamento Familiar by bringing shirts and hats with words of appreciation for the staff and volunteers.  They look forward to future camps and the opportunity to continue this journey with their new extended camp family.