Amigos! L.A.’s very own La Santa Cecilia is performing at The Walt Disney Concert Hall on March 26th along with the great, Buika!

Amigos! L.A.’s very own La Santa Cecilia is performing at The Walt Disney Concert Hall on March 26th along with the great, Buika!

Home » Featured » Amigos! L.A.’s very own La Santa Cecilia is performing at The Walt Disney Concert Hall on March 26th along with the great, Buika! 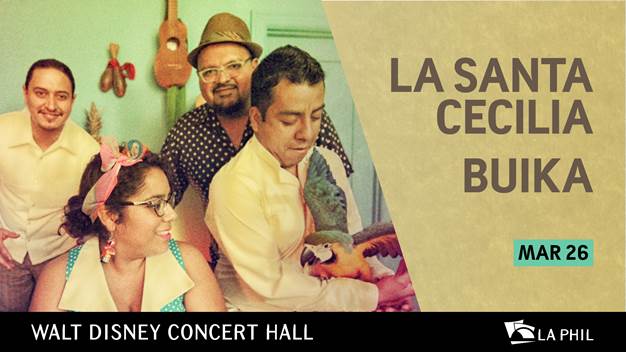 La Marisoul of East L.A.’s La Santa Cecilia and acclaimed Spanish singer Buika appear on one special night showcasing their amazing and unique voices in wondrous Walt Disney Concert Hall. Limited-edition screen print designed by Self Help Graphics & Art available with your ticket purchase when you use the code SHGA. *

*While supplies last. Pick up print at the concert. This offer is only available online with the code.

Get your tickets at: http://bit.ly/LAPhil_LASanta_AlliedH 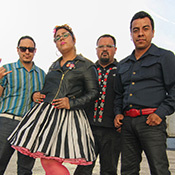 La Santa Cecilia consists of accordionist and requintero Jose “Pepe” Carlos, bassist Alex Bendana, percussionist Miguel Ramirez, and lead vocalist La Marisoul, whose captivating voice sings about love, loss and heartbreak. Their influences range from Miles Davis to The Beatles, Led Zeppelin to Janis Joplin and Mercedes Sosa to Ramon Ayala. Their common love of music and openness to all genres led them to the concept of La Santa Cecilia in 2007 – named after the patron saint of musicians.

In 2013, the band released their major label debut Treinta Dias (30 Days), which featured a captivating collaboration with fan Elvis Costello on “Losing Game.” Now, just after their GRAMMYwin for Best Latin Rock, Urban or Alternative Album, the band presents their new album Someday New. The album features seven new tracks, which include a heartfelt Spanglish rendition of The Beatles iconic “Strawberry Fields Forever”,plus the unforgettable new Mexican classic “Como Dios Manda”; as well as a fresh new radio-edit of their single “Monedita” and the full version of their moving, and militant “ICE – El Hielo.”

Buika (María Concepción Balboa Buika) was born on May 11th 1972 in Palma de Mallorca, Spain, the daughter of African parents. 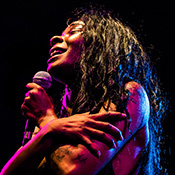 She lives in Miami Florida.

Hailed as a star in contemporary World Music/Jazz/Flamenco/Fusion, Buika is blessed with a remarkable voice; raw and smoky, but with a tenderness that hits right at the heart, vibrantly deploying her rich, sensual and husky instrument, best described as ‘velvet gravel’.

It has been said that, “Buika combines all styles along with her emotionally charged lyrics and a broken sensuality in her voice“. Rare is the artist to garner comparisons to Nina Simone, Chavela Vargas and Cesarea Evora, but Buika in her own unique way has been compared to them all.

Her last album “La Noche Más Larga” (The Longest Night) her 7th, is her most diverse. She continues to break down the walls that surround Flamenco and Copla, the root sources of everything she does, but a tradition that can’t contain her ever-evolving vision. The album charted in such diverse countries as the USA, Spain, France, the UK, Holland, Turkey, Mexico and Argentina. Most significantly, Buika wrote and was credited for nearly half of the songs.

Her most remarkable soundtrack and film collaboration took place in 2011, when Director Pedro Almodovar featured her in his movie “La piel que habito” (The Skin I Live in).

Buika has received multiple awards, including several Latin Grammys and she was nominated this year for Best Latin Jazz Album at the 2014 Grammys in LA.

NPR has listed Buika among the best 50 vocalists of all time and calls her “The voice of freedom”.

Buika makes songs her own. “I just do what my heart is demanding. Sometimes in the music business people do what they think other people will like, but that’s a limitation. I just want to be true. I want what Charlie Parker’s got — I want eternity.”