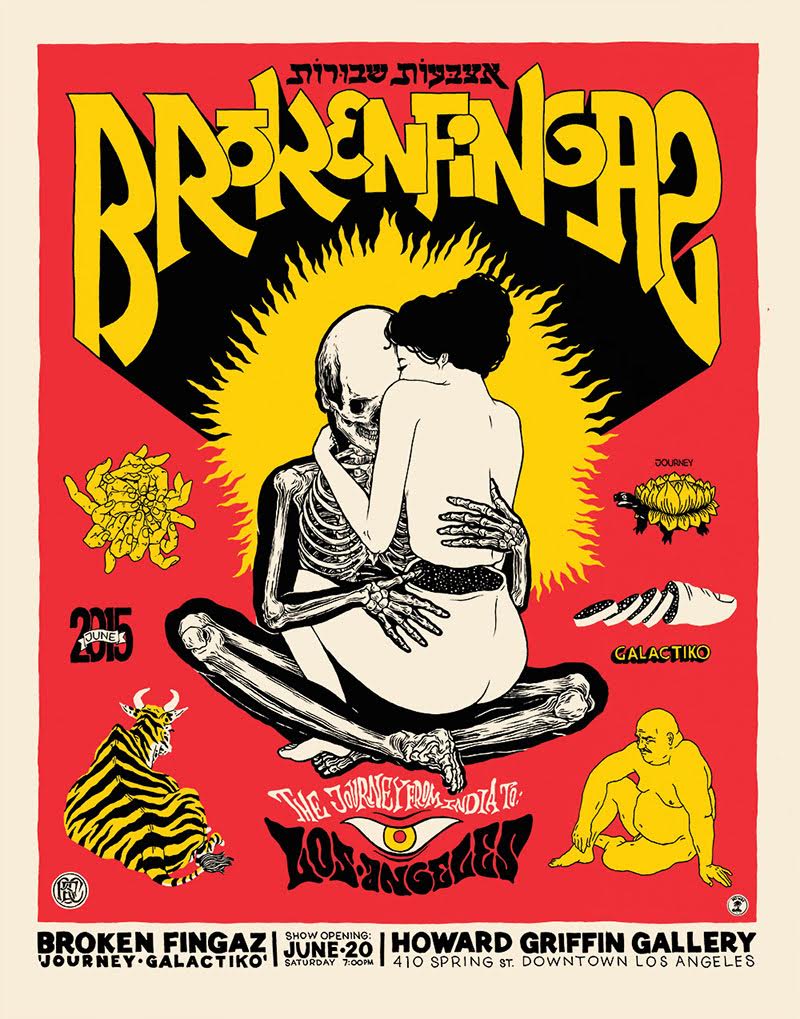 On 20th June 2015 Howard Griffin Gallery Los Angeles are pleased to present Journey Galactiko, the debut show from Broken Fingaz in the USA.

Journey Galactiko centres around a large 150 cubic metre temple presented in the middle of the gallery space. This monolithic structure constructed of wood and found materials will be the context for an exploration of the universal pervasiveness of the image, through Broken Fingaz’ unique graphic style and imagery. The concepts presented in Journey Galactiko are the product of several months of travelling and working across India, during which time Broken Fingaz absorbed and assimilated myriad cultural influences that permeate every aspect of their widespread artistic output.

In the installation, Broken Fingaz visually depict their artistic journey from India to Los Angeles, intertwining spiritual motifs and icons from the Indian religious tradition with the ubiquitous tropes of Western capitalist advertising. In this way, they seek to explore the power of image making and its diverse manifestations across both Eastern and Western cultures. The physical construct of a temple as a place of spirituality and interiority is employed to stand in stark contrast with the Western world’s focus on external appearances and the physical world. Within the temple, Broken Fingaz reveal an insight into their own private, introspective world through forms and imagery that envelop the viewer in an enclosed, claustrophobic space of inner reflection. The duality between interior and exterior is interrogated once the viewer steps out of the safety of the temple space into the gaudy, overwhelming world outside, filled with sounds, colours, lights and slogans that arrest the eye and manipulate the mind. The temple represents a retreat for the artists within the gallery space, a place in which they can be obscured from the consumerist world that surrounds them.

At the same time, Journey Galactiko acknowledges how emotive imagery, repetitive language and bright colours are used in both religious iconography and capitalist advertising as a form of propaganda to influence and manipulate the viewer. Sharing this mode of communication, capitalism and religion can thus be seen to have many parallels. As prolific image makers themselves, Broken Fingaz aim to subvert their own mode in Journey Galactiko to comment on how images surround us, influence us and ultimately control us. The exterior of the temple is designed to affect people’s thoughts and world view in the same way as adverting and brand packaging. Broken Fingaz combine spiritual motifs with postmodern neon signage, rotating billboards and the bright, affective colours of advertising to draw parallels between East and West, exploring the power of the image and visual representation as a form of mind control. This tension is at the heart of the exhibition, posing important questions about the nature of our reality and what affects our consciousness.

Broken Fingaz are a world-renowned artist collective from Haifa, Israel. Since its founding in 2001, its members Unga, Kip, Tant and Deso have worked prolifically on the international art scene, with a practice that extends to graphic design, animation, graffiti, music, film and installation. Their work has been exhibited in major galleries including Haifa Museum of Art and Tel Aviv Museum alongside solo shows in London, Berlin, Amsterdam, St Petersburg, Tokyo and Vienna. Broken Fingaz’ unique visual aesthetic draws on the rootless culture of their homeland, creating a visual identity for a generation of young Israelis who find themselves within the contentious and problematic Middle East. At the same time, over a decade of travelling has lead to an absorption of cultural influences from both East and West.

Using bold lines and acid colours, Broken Fingaz’ work visually alludes to 1980s comic book illustrations and pulp horror. Their distinctive subject matter explores themes of sex and death as a means of understanding human nature and the human condition. By confronting viewers with controversial and sexually explicit imagery, Broken Fingaz draw in notions of the abject through a confrontation with the baseness of humanity and its suppressed desires. Bodily dismemberment, mutilated limbs and skeletons represent not only death, but the need to understand the physical body and the unseen side of our corporeality.

In both style and subject matter, their work is heavily inspired by Japanese Shunga woodcut prints. In their recent work, this has been combined with motifs from Indian spirituality, interrogating the duality between the sacred and the profane through symbolic imagery. In this way, their art feeds off a tradition in which the East has long been used to represent the wild, primal side of humanity. Employing themes that transgress and threaten, Broken Fingaz’ intention is to shock the viewer. This is made more significant in the context of the street, as private desires invade public space.

Humorous, enigmatic and mysterious, the hallucinogenic imagery of Broken Fingaz’ work provokes a visceral reaction that disturbs conventional identity and notions of the self. In this way, their work represents a return to truly subversive public art – a practice in which undermining the foundations of social order was once a founding principle. 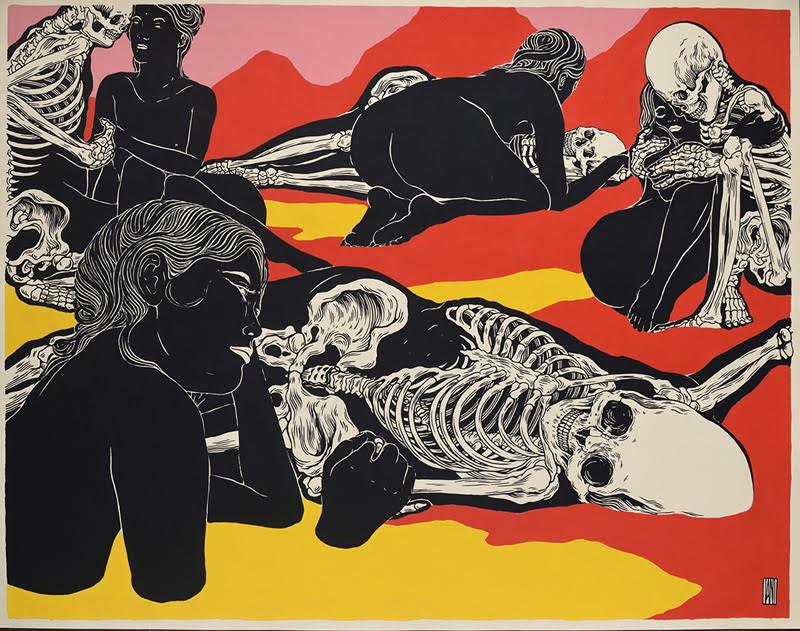 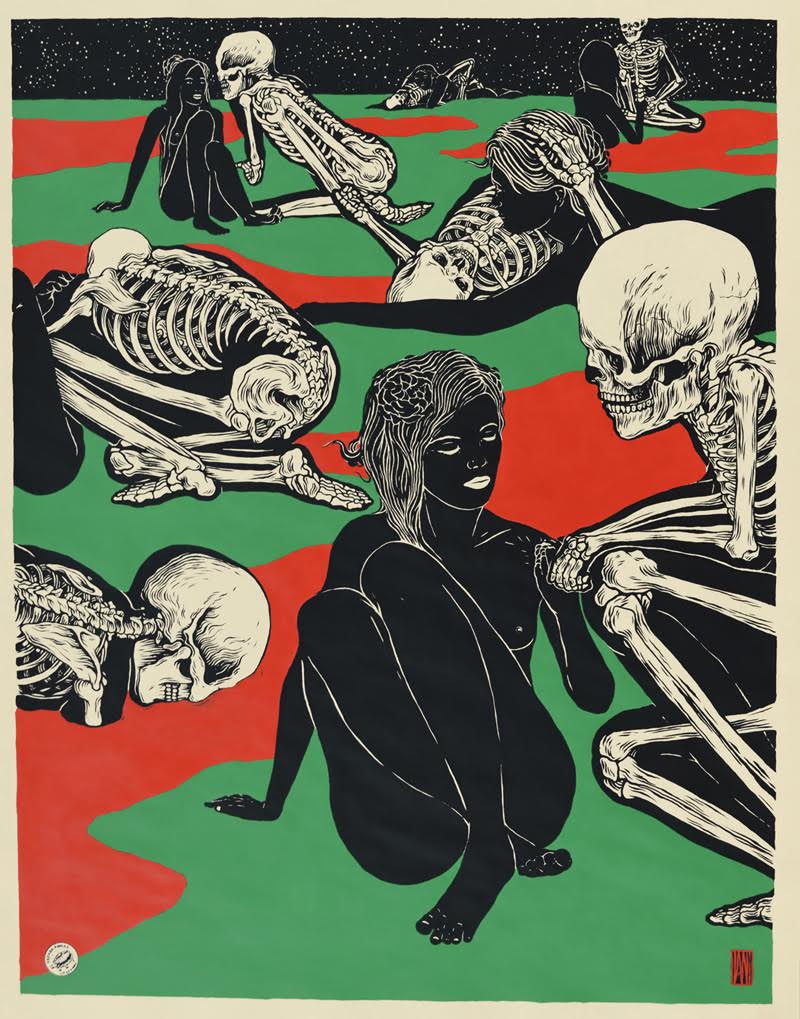