The last 3 years have been crucial for the development of Colombia’s local talent reaching international unprecedented development and success. Don’t miss these acts live at SxSW 2016! 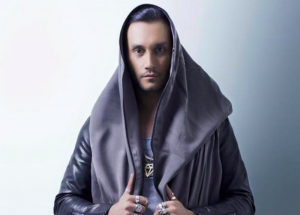 DURAN has been mixing the traditional folk he grew up hearing with different types of vibrating rhythms since 1999, giving life to a new sound in Colombia called “Nü Cumbia” and a new aesthetics trend that he calls “chirripop.” The style mixes electronic beats with cumbia, champeta criolla, terapia, dance hall and Hip Hop. The lyrics employ a particular magical realism narrative, while fusing it with street slang. The overall sound radiates a potent ‘Colombianness’, with his debut album making the sounds approachable and accessible- while remaining highly danceable. 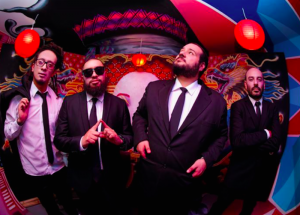 El Freaky- a global bass collective that has been setting dance floors around the world on fire since 2013. The group is known for their striking live show, using captivating visuals and lights against music that holds true to Colombian folklore and Caribbean roots. El Freaky has taken their party around the world- to everywhere from the USA to France to Peru and to prominent stages like Estereo Picnic (Colombia), Rock Al Parque (Colombia), Vive Latino (MX), and, of course, SXSW.

They released their first album ‘Sabroso,’ in 2013 which included a collaborations with producer Benny B, Alfredo Guiterrez, Charles King, and Empire Isis.

Naturally every occasion for El Freaky is a celebration- when their 5th anniversary came around, they celebrated with over 60 shows across Colombia and the rest of Latin America, the USA, Africa. They also released two singles ‘Summer Now’ (ft. Jamaican reggae star Gyptian) and ‘Bad Boys (ft. Mr. Lexx)’. Both singles were widely acclaimed by critics and the public alike. In 2016, El Freaky is getting reading to release their second studio album, and will be bringing the party back to the U.S. and Europe.

Pedrina y Río are an alternative pop duo from Bogotá, Colombia characterized by the dreamy voice of singer Pedrina backed by poignant electronic pop melodies that hypnotize whoever listens. The duo formed in 2012 by accident- Cerón (Rio) was Pedrina’s voice teacher. They soon realized that musically they couldn’t stop creating together. They wanted to make pop that was experimental, and find a way for the Colombian market to catch on.

They’ve since been sneaking into the Colombia (and now global) airwaves- with chart-topping songs all over the country. Their first single ‘Enamorada’ quickly exceeded over 2 million views on Youtube.

The duo has been noted for their vibrant live performances, colorful songs with simple-yet-profound lyrics, which combine contemporary electronic sentiments with touches of traditional latin american folklore woven throughout. Their debut LP ‘Canciones Sin Ropa’ was released in 2015. 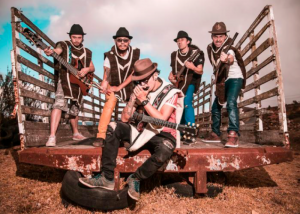 Velo de Oza has been described by Billboard as a: “…troupe plays a mixture of carranga — folk music from Colombia’s countryside, mostly the state of Boyacá — married to rock and pop. The sound is unique, in large part thanks to the use of traditional instruments like the guacharaca (a sort of tube scraped by a fork to produce a scratching sound) and a fantastic sense of humor both onstage and in recordings. Fun to watch and hear.” The band, from Colombia’s Boyacá region, is characterized by their unique fusion of rock and tradition Carranga sounds. They have been playing together for nine years and are recognized as founders of a genre called ‘Carranga Rock.’

The band’s first LP ‘Sumercé’ was released in 2012 and propelled them onto stages around the world like the Bogotá Music Market, Circulart, and WOMEX.

About Bogotá City of Music: Bogotá City of Music -acknowledged as such by UNESCO in 2012- is the result of an alliance between the Invest in Bogota (investment promotion agency), the Bogotá Chamber of Commerce and City Government agencies such as the Secretary of Culture, the International Relations Department and the Arts Institute. These institutions work to promote Bogota’s music industry and music scene, a blend of heritage, innovation and sheer vital enjoyment where the new Latin sounds of Colombia are brewing.

About SXSW: Started in 1987, South by Southwest (SXSW) is a set of film, interactive, and music festivals and conferences that take place early each year in mid-March in Austin, Texas. SXSW’s original goal was to create an event that would act as a tool for creative people and the companies they work with to develop their careers, to bring together people from a wide area to meet and share ideas. That continues to be the goal today whether it is music, film or interactive technologies.