HOLLYWOOD FOREVER IS PROUD TO PRESENT 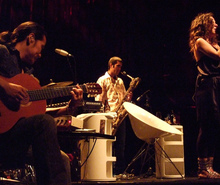 Influenced by both Brazilian diva-esque pop stars like Gal Costa and outsider psychedelia such as Os Mutantes, Bebel Gilberto is an accomplished and multi-faceted singer who places little limitation on her sound. Though her music fluctuates amongst downtempo electronica and Latin Pop, her primary focus is in bossa nova.

Gilberto was born in New York City, New York, US on 12 May 1966; however, she grew up in Rio de Janerio, Brazil. Her parents are renowned bossa nova pioneers João Gilberto and Miúcha, both collaborators of the great Stan Getz. They are also of Brazilian descent, but were living in New York City around the time of their daughter’s birth. Her uncle, Chico Buarque is also an incredibly talented singer and songwriter. Provided Bebel’s strong musical background it is no surprise that she started sining at a very young age. Bebel was constantly surrounded by music growing up and became acquainted with several of her parents’ musical friends such as David Byrne, Caetano Veloso, and Stan Getz, the later whom she would go on to perform with at Carnegie Hall when she was only 9 years old.

Her first official self-titled EP came out in 1986. She recorded this EP with Cazuza, a fellow musician and former band member of Barao Vermelho. Shortly after Cazuza’s passing in 1990 Bebel moved from Brazil to Manhattan, New York. With her move to New York she participated in the high profile project “Red Hot + Rio” alongside artists such as Everything but the Girl, Maxwell, Ryuichi Sakamoto, Stereolab, Sting, David Byrne, and George Michael.

Since Bebel’s move to the city she went on to be featured as a guest singer on various albums. Some including experimental electronic acts like Amon Tobin and Thievery Corporation, mainstream smooth jazz artists such as Kenny G, and even No Wave artists like Arto Lindsay. For her 2000 breakthrough album “Tanto Tempo” Bebel took in the diverse musical landscape of New York, adopting the sounds of urban life while staying attuned to classic samba music. “Tanto Tempo” proved to be a smash hit in clubs and made Bebel one of the best-selling Brazilian artists in the United States since the 1960s.

Bebel released two more albums under the Ziriguiboom label: her 2004 self-titled album and her 2007 “Momento” album. Her next album “All in One” was released on Verve Records in 2009 and saw a slight departure from her previous electronica sound heading instead for a more traditional and organic sound.

Bebel’s music has been featured in many films and television series such as “Eat Pray Love”, “Next Stop Wonderland”, “Bubble”, “Closer”, “Six Feet Under”, “Nip/Tuck” and the animated movie “Rio” for which she also lent her voice for the character Eva. Her next album “Tudo” was released on 13 June 2014 and is a continuation of her modernized bossa nova style. The album was produced by Mario Caldato a sound engineer known for his work with the Beastie Boys and contains cover songs such as Neil Young’s “Harvest Moon” and Jobim’s “Vivo Sonhando”.