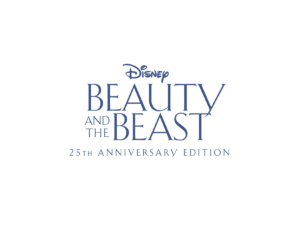 Relive the magic and the music with four versions of the film plus all-new bonus features!

With the Release of the Walt Disney Signature Collection Edition

Twenty-five years ago, Disney’s “Beauty and the Beast” broke ground as the first animated feature film to receive an Academy Award® nomination for best picture, and now this tale as old as time joins the Walt Disney Signature Collection on Sept. 6 on Digital HD and Disney Movies Anywhere, and on Sept. 20 on Blu-ray™ and DVD.

The beloved animated classic has truly stood the test of time and now a whole new generation of viewers are invited to be our guest and fall in love with this enchanting tale, its captivating characters and unforgettable, award-winning music score and original song, “Beauty and the Beast.”

The Walt Disney Signature Collection edition features four versions of “Beauty and the Beast.”  The Blu-ray release will include the original theatrical film; an extended version with the “Human Again” song sequence and a never-before-released on home entertainment sing-along version.  The original work-in-progress version will be available digitally and on Disney Movies Anywhere.

There is also a host of all-new bonus extras including a rare opportunity to gather around the piano with some of Disney’s greatest composers, including Alan Menken (“Beauty and the Beast,” “Aladdin”), Stephen Schwartz (“The Hunchback of Notre Dame,” “Pocahontas”), Kristen Anderson-Lopez (“Frozen,” Disney’s upcoming “Gigantic”), Robert Lopez (“Frozen,” Disney’s upcoming “Gigantic”) and Lin-Manuel Miranda (Disney’s upcoming “Moana”) as they sing and share how they’ve personally been inspired by the film’s award-winning music; a look at how Walt Disney himself sought to adapt this famous fairytale; a nostalgic look back with Paige O’Hara, the voice of Belle; behind-the-scenes access into the recording booth with the cast; and a sneak peek at Disney’s upcoming live-action re-telling of “Beauty and the Beast,” arriving in theaters in 2017.

Walt Disney Pictures’ magical animated classic “Beauty and the Beast” captures the magical journey of Belle (voice of Paige O’Hara), an independent and intelligent, modern-day heroine who’s taken prisoner by a hideous beast (voice of Robby Benson) in his castle. Despite her precarious situation, Belle befriends the castle’s enchanted staff—a teapot, a candelabra and a mantel clock, among others—and ultimately learns to see beneath the Beast’s exterior to discover the heart and soul of a prince.

“Beauty and the Beast” was nominated for six Academy Awards® and was the first animated feature to receive an Academy Award® nomination for best picture. It won two Oscars®, including best song, by the renowned Alan Menken and Howard Ashman, and best original score (Menken), as well as a Golden Globe Award® for best comedy/musical.

“Beauty and the Beast” was Disney’s first animated film adapted into a Broadway musical, which ran for 5,464 performances from 1994-2007 and has delighted more than 35 million people worldwide. On March 17, 2017, audiences will experience the thrilling retelling of the original tale through Disney’s live-action film, “Beauty and the Beast,” in which Emma Watson (“Harry Potter” films) plays Belle and eight-time Oscar® winner Alan Menken returns to recreate his Academy Award®-winning music score. 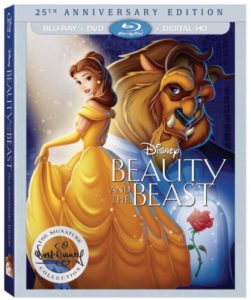 ABOUT THE WALT DISNEY SIGNATURE COLLECTION:

The Walt Disney Signature Collection includes groundbreaking films created or inspired by the imagination and legacy of Walt Disney, featuring timeless stories and characters that have touched generations. Each release will offer special features for every member of your family plus a unique digital experience.

Disney Movies Anywhere (DMA) is an engaging and family-friendly cloud-based digital movie service that makes it simple to buy your favorite Disney, Pixar, Marvel and Star Wars movies once and watch them anywhere.  With DMA you can explore Disney’s library of over 450 eligible digital movies, discover hours of new and exclusive short-form content, and watch your digital movies from the comfort of the living room or across multiple mobile devices.   You can add the free DMA app to a multitude of devices including iPhone, iPad, iPod Touch, Android mobile phones and tablets, Android TV, Amazon’s Fire tablets, Fire TV and Fire TV Stick, Roku, and Xbox 360. Then, connect your DMA account with participating providers including iTunes, Amazon Video, VUDU, Google Play, and Microsoft Movies & TV and your eligible movies will be shared across all your connected platforms.  In addition, you can redeem Digital Copy codes found in Disney, Pixar and Marvel Blu-rays and DVDs, as well as earn Disney Movie Rewards points with every digital purchase.

ABOUT THE WALT DISNEY STUDIOS:

For over 90 years, The Walt Disney Studios has been the foundation on which The Walt Disney Company was built. Today, the Studio brings quality movies, music and stage plays to consumers throughout the world. Feature films are released under the following banners: Disney, including Walt Disney Animation Studios and Pixar Animation Studios; Disneynature; Marvel Studios; Lucasfilm; and Touchstone Pictures, the banner under which live-action films from DreamWorks Studios are distributed. The Disney Music Group encompasses the Walt Disney Records and Hollywood Records labels, as well as Disney Music Publishing. The Disney Theatrical Group produces and licenses live events, including Disney on Broadway, Disney On Ice and Disney Live!