Back to Life by Bellehouse: the new face of folk?

Back to Life by Bellehouse: the new face of folk?

Home » Featured » Back to Life by Bellehouse: the new face of folk?

Folk music in Brooklyn? Why not? Much of the Americana and folk music of the 60’s was birthed in Washington Square in Manhattan, so a few subway stops further down the MTA should make no difference.  And it doesn’t, as the Brooklyn-based band Bellehouse makes very clear.  A five-person group that captures the American folk spirit with strong female-led vocals and addictive string-rhythms, Bellehouse brings back the 60’s but is as current as the EDM pouring out of the  clubs in New York’s meatpacking district. Their debut EP Back to Life, released this month, might just put them in contention for the title of the New Face of Folk Music in America.

Bellehouse calls itself an “Emerging indie-string Americana band” but there is nothing emerging about them other than the youth of their catalogue – Back to Life is their first multiple-song release.  Bellehouse has the polish of people who have spent their lives writing and singing music.  Their lyrics are sharp, their harmonies smooth and on target and their performances are high energy and fun. Plus, they incorporate all the modern bells and whistles they need to make their sound in the here and now, as well as in the historic folk world.

The EP opens with the title song, released earlier as a single, and draws you in fast and deep with an addictive guitar rhythm, hooks any pop singer would envy and the razor-edged harmony of Jess Taylor Clinton, Sarah Elizabeth Haines and Catie Friel. Their vocal blend is so sharp it tightens the muscles in your belly. The banjo moves in and picks up the tempo the three voices rise together, When it’s back to life, we must sin as wise /We must owe the Earth our lives and buy what time is hawking.  You are hooked.

You don’t have long to wait for your next fix. “Take the Ore” rolls out slowly with banjo and standup bass and guitar beats while the vocals rise and fall with an almost childlike sing-song quality. The second time you hear it (you will put it on repeat) you find yourself humming or even singing along and realizing what a sophisticated piece of music this is.  By the time the Haine’s violin sails in and introduces the second stanza vocals that are somehow simultaneously static and melodic, Bellehouse has your full attention: you want to know this song and sing with them.

Jess and Sarah told me in an interview on Music FridayLive! that assembling the complex harmonies and integrating them with the string tempos frequently takes quite a bit of time time.  They often start with the lyrics and then move to the strings; but sometimes they begin with a melody, an idea or a snatch of music in one of the band member’s heads. But regardless of how they begin and how much time it takes, fun is the key – bringing the voices together in complex harmonies is what propels them.

That complexity and the fun behind it are on full display in the EP’s third song, “The Line and the Light”.  A lively but mysteriously melancholy banjo sets up the tempo as a single voice sings alliterative lines: I have seen the light from the very first time we’ve spoken /I have seen the line like a barricade, still unbroken. Then the banjo accelerates, the rhythm guitar kicks in and the harmonies move at a blistering rap-like pace with a high-pitch soprano counterline soaring red hot over the throughline.  The blended voices gather even tighter and rise up in the chorus: Need and know me with your eyes wide/ Need and know me with your bright eyes wide.  It is spectacular.

Bellehouse gives you a breather with “Josie”, which starts out innocently enough with a guitar strum and simple banjo echoed in a standup bass.  A single voice sings the opening of a story:

Belle, lay of the lake, hardened to shake /She’s wired for hope but no mistake /Pliant be damned makes a good man /The fair are there to mediate. But as with everything Bellehouse, harmonies build upon harmonies, the arrangements shift, the violin adds a new color and the hooks come out. You find yourself singing along Heed the heat and find an open door as a simple, sunny story has evolves into a powerful life lesson.

The EP leaves you with my favorite song, the moody “Breakaway Town” a poetic ballad of a woman’s shotgun revenge written by Jessie Clinton that is as old as the Dust Bowl and new as Title IX. The sweet voices sing Took a double-barrel leading in the front door/Shot one or two, but her heart begged more/Make them pay for every dress they tore” with and edge  you won’t forget.  A haunting story darkly colored with a simple guitar rhythm. Stunning and unforgettable.

Blending Celtic, Americana, trad, folk, Motown rap, and three golden voices, Bellehouse is well on the way to being the new face of folk in America. 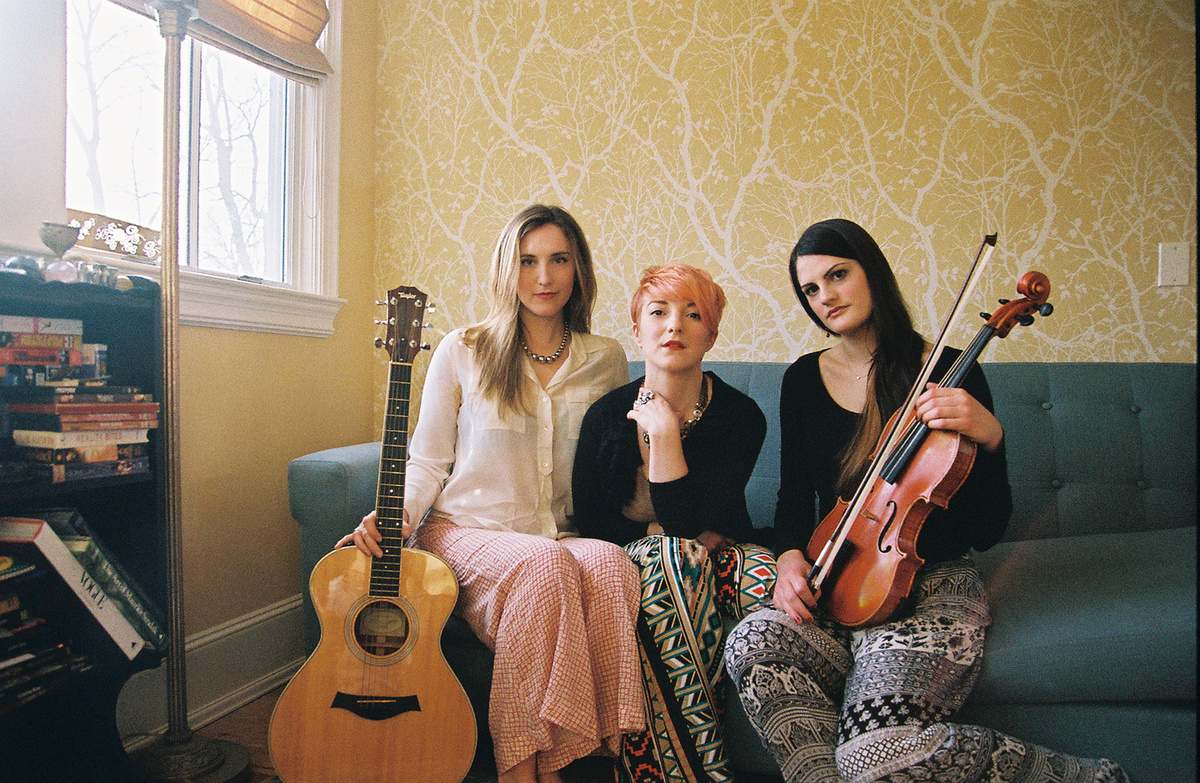 Back to Life by Bellehouse