(Los Angeles, CA) –Art With Teeth curates an exhibit of powerful imagery created by Artists who’s work exposes, informs or addresses critical issues facing us in these modern times. Art Killing Apathy curates a line up of spoken word and musical performances with a message of change, engagement and dissent.

The show opens on July 25th at 7pm and performances begin at 8pm.

Hal Hefner is an award winning artist and illustrator known for his Consume series, inspired by John Carpenter’s, 80’s cult film, They Live, which is infused with social and political undertones that punch you in the face and force you to think. 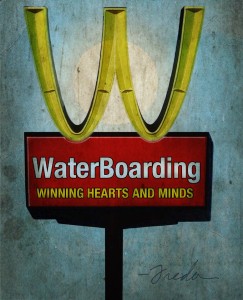 Anthony Freda has been featured in The New Yorker, Rolling stone, Time, Esquire and scores of other fine publications. “Freda’s use of text and imagery combine to turn the obvious on it’s head and, in so doing, force the truly interesting issues to the forefront” – Erika Pope 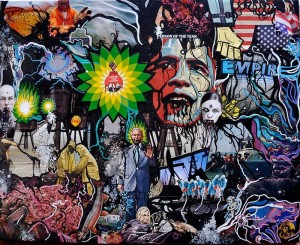 Abby Martin is an American journalist and former host of Breaking the Set on RT America network. Her art displays an intense passion for life, deconstructing the world around her in constant search of balance and truth, and a deep desire to engage others in her vision.

Ernesto Yerena is founder and curator of the Alto Arizona Art Campaign and a founding member of the We Are Human Campaign. His work depicts his frustrations with the oppression in his community as well as creating work in solidarity with the community in the defense of dignity and rights. Through his brazen imagery, the artist brings political concerns to light with subject matter that depicts cultural icons, rebels and everyday people voicing their stance against oppression.

CS Stanley is known for his iconic delivery of pop imagery and commentary of today’s political climate, affiliated with several paint crews including Scotlands Black Tartan Division, and operaring as American Council member for The Secret Society Of Super Villain Artists.

Keef Ward is the founder of Art With Teeth and an agit-pop artist, cultural muckraker and connector with an ability to distill complex issues into a single iconic, unforgettable representation.

Rooftop Revolutionaries is a political hard rock band founded and fronted by creative activist Eleanor Goldfield. The band has played extensively on stages and at activist events, on international TV and radio and has shared the stage with the likes of Tom Morello and Immortal Technique. 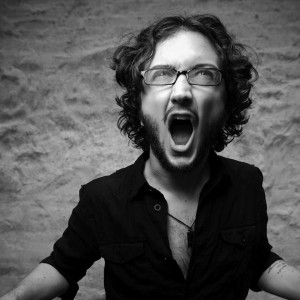 Lee Camp is a comedian and activist, and host of the weekly comedy show Redacted Tonight with lee Camp on RT America. He’s also the creator of the hit Youtube series Moment of Clarity.

Matt Sedillo is a nationally touring revolutionary poet. He has spoken at numerous conferences throughout the country and on countless campuses.
Joey Flores has been a featured poet at some of LA’s top spoken word venues. He is the former emcee for conscious alternative hip hop band The Capitalist Hippie Complex.

FachaPatoto is a new SPACE in Boyle Heights dedicated to providing a platform for established and emerging artists, where art can support and collaborate with non-profit and grassroots organizations to raise awareness of important social issues.