As Los Angeles gets comfortable with its status as the music capital of the nation – and in some ways, of the world –  residents of the City of Angels are increasingly faced with the problem of choosing among a dizzying proliferation of events, bands, festivals, and venues for entertainment.  I know, this is the kind of problem most of the nation’s and world’s cities wish they had, but LA’s peculiar geography and mix of people present unique problems, especially for fans who want to follow particular bands or genres.   I was recently introduced to DoLA, an event notification service that may bring order to the firehose of events in this city bisected by a mountain range.  A new venture based on cooperative partnerships, technology and user control may just make life easier for fans and bands and help LA’s music and entertainment scene get even better.

At present, you can follow a band’s website and get their newsletters, or you can get to know the venues that cater to your tastes and subscribe to their calendars and get notifications.  Plus, you can subscribe to services that track touring bands and when they will be in LA. Which is why you get 200 emails a day, most of which you delete.  And after all that, you still aren’t sure when Halo Circus or Mitre or Cylvia or the Jack Shit Band are playing this week, or if there are, exactly where the venue is.

All of this is why I was very interested in the invitation I received to last week’s launch party of DoLA at the Regent, the downtown theater recently refurbished by the family that owns the Echo and the Echoplex.  It featured AraabMuzik, so I knew that someone at DoLA knew their music and their venues. That someone turned out to be Brittany Martin, Content Manager of DoLA, who gave me a quick tour of the venue and answers to my questions about who was behind the festivities.

The party was first rate.  By 10 PM it was packed and pulsing, good for a Wednesday night in DTLA. The warm up DJ’s – Nite Jewel, Cole M.G.M. and Groundislava – did their job well, keeping the hall exciting as the post-late dinner shift crowded in.  While scaled down from European mega shows, AraabMuzik poured energy into the ready to rock party goers.

But the real point of the evening was to familiarize those inside with DoLA. This was accomplished with a strategic subtlety that demonstrated that Ms. Martin also knows her millennial+ audience. She understood that in-your -face promotion would be a turn off.  Everyone there RSVP’d through the DoLA site so they knew about it; what the launch party said without words is that this is what to expect – an easy to find good time geared to your likes. 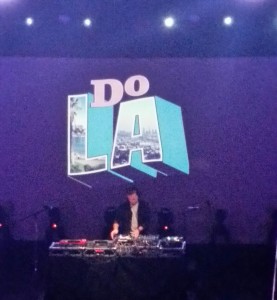 But can DoLA deliver more than a good launch party, which any number of local organizations can and do on a regular basis?  From the initial kickoff, I think that they have put together the right combination of technology, local smarts, a regional viewpoint, cooperative partnerships and consumer focus to pull it off in a way that other notification services don’t, at least not yet.

A  key to DoLA’s utility is their user customization that enables subscribers to tailor who they want to follow, what venues they want to know about, and how they want to get the information – or, if they want, ignore all that and have one go-to site where they can scan the entire LA area entertainment scene from music to chefs.  And the LA scene for DoLA ranges as far as Long Beach, Palm Springs and even Santa Barbara. Behind the scenes,  the key to making this work is their cooperative model;  they have built partnerships with venues, other publications, local tastemakers and influencers that allow them to be part of the city’s fabric rather than yet another website competing for eyeballs and ads.

The result is a site that will make residents’ experience of LA both broader and easier at the same time.  Users can get timely information on events, bands and venues they follow, all in one place without multiple subscriptions and a slew of weekly emails.  At the same time, using DoLA exposes users to top picks -not necessarily the biggest and most famous, but the bands and events that have attracted the most activity on DoLA. Users determine who the picks are, not agents or promoters or advertisers. Best of all, users can limit and target information so they don’t get overwhelmed, which is what Los Angeles can do really, really well. 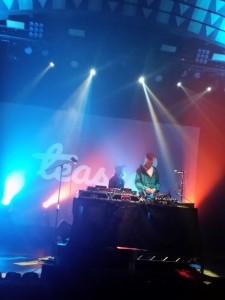 As the Los Angeles branch of DoStuff LLc., a national company that manages similar platforms in 16 other cities, including Mexico City, the platform and staff is tested.  But more important, the local staff have built partnerships with KCRW, the Echo and others and get advice from local tastemakers like DTLA, The 405, SOFAR Sounds LA. This is why I think DoLA will also impact the quality and quantity of music and other events in the city.  Bands find LA just as intimidating as fans do – I get constant requests from bands about where to book for their genre.

By helping bands and venues build loyal followings and making attending live music easier, I suspect that the diversity and the quality of live music will rise.  People will go to more concerts, giving bands more places to play and more experiences in front of live audiences.

DoLA is new, like much of LA, but it has made a good start.  I am especially happy to see that LA’s huge Latino music community is represented with clubs like Los Globos, The Mayan, El Foridita and entertainers like Irene Diaz, Mitre and Gina Chavez in their database for fans to follow. With LA the source of the new American Latin Music form now gaining traction in other cities, this is smart thinking by DoLA and a service to LA’s largest ethnic community. I give it a thumbs up.