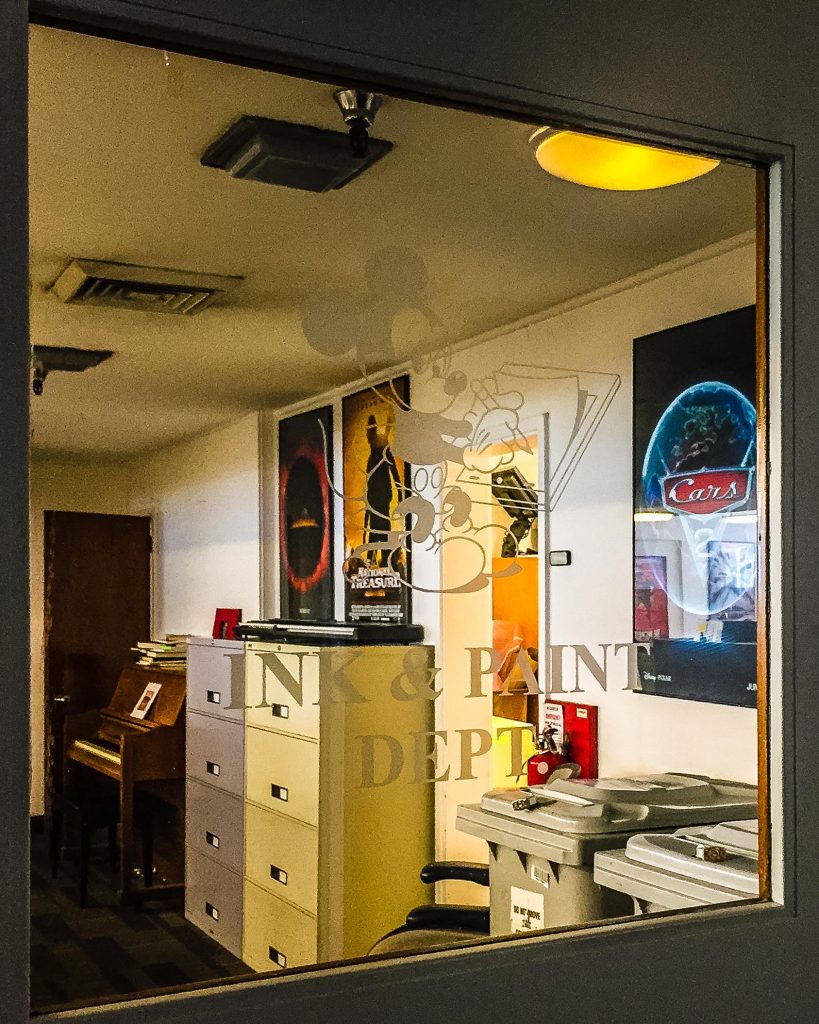 “All our dreams can come true, if we have the courage to pursue them” – Walt Disney

Walt Disney’s quote has never rung truer than for Antonio Pelayo, the young man who had the courage to dream of growing up in the Disney Studio Lot as an artist.

In an exclusive interview with Gypset Magazine, Antonio opens up about his crusade to keep the original imagineers’ celluloid animation, legacy and tenacity alive as the Head Special Effects at Walt Disney Studios and still, balancing a contemporary art business with other artist for his multicultural event El Velorio.

You are the last one of a legacy for Disney’s Ink and Paint Department, how is that possible?

It’s the core. If you get rid of the core, then, where’s the essence? Where’s the history?

We’re still in the original Ink and Paint building. This is where all the ink and painting took place. When people find out about our department, they’re amazed! They say, “Oh my god, you guys are still doing this!?” The video that I recently posted (on Facebook) is going viral.

That’s amazing! I thought everything was digitalized now.

They consider us like a museum. We have two editions a year, there is a scene selected and we reproduce into an edition of 250 pieces. Those are the pieces that are sold to employees. We create two editions, so we produce 500 pieces a year. And that’s what keeps our department alive. And it’s in demand. We sell every edition (snaps fingers), like that!

The employees see the appreciation of the work.

They want a piece, because this is the only place where you can get it. 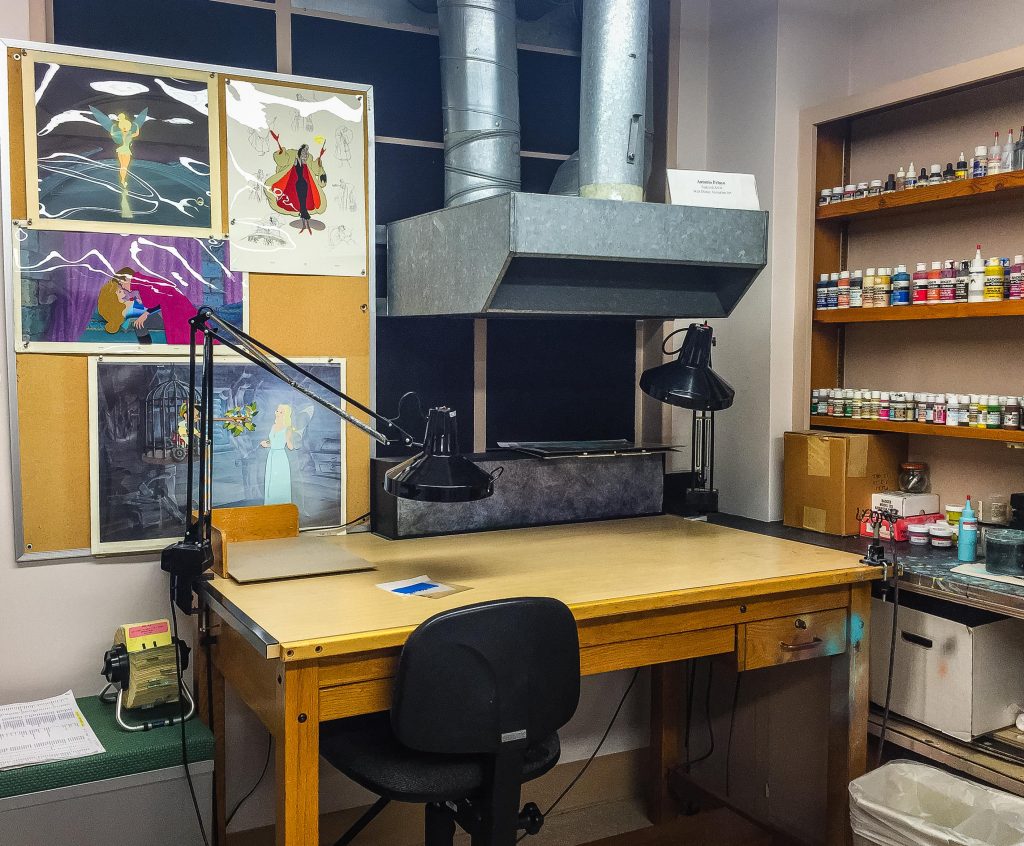 It’s pretty diverse. Some people have commented that Disney wasn’t in the past, but I know Latinos with very high positions now in the company. It’s very diverse.

What is your vision for the department?

I’m hoping that it remains until I retire. And beyond. One of the things that I love about being part of the department is that we also create artwork that goes out into museums. We will be in a museum in Sweden, Denmark, Paris and Japan, these are scheduled exhibits where the work we’ve created will be. These will be original cells created for each exhibition. They started curating the exhibits 6-7 years ago, so my work has been exhibited all over the world. In about 10 international museums, and I think this program is going to continue. That’s what’s great about being a part of this work.

As the company has transitioned to digital, your department has kept that essence and heritage of the original and traditional work. Would you like to see new projects where perhaps they incorporate that old style?

There have been talks, but it’s very expensive. Snow White took 7 years to make and was expensive. There is a faster turnaround with digital, about 3 years, and the cost is a lot less. It’s probably never going to happen. I hope it does. That would be incredible. Maybe a short. That would be really cool!

Would it be a new character or a re-make? 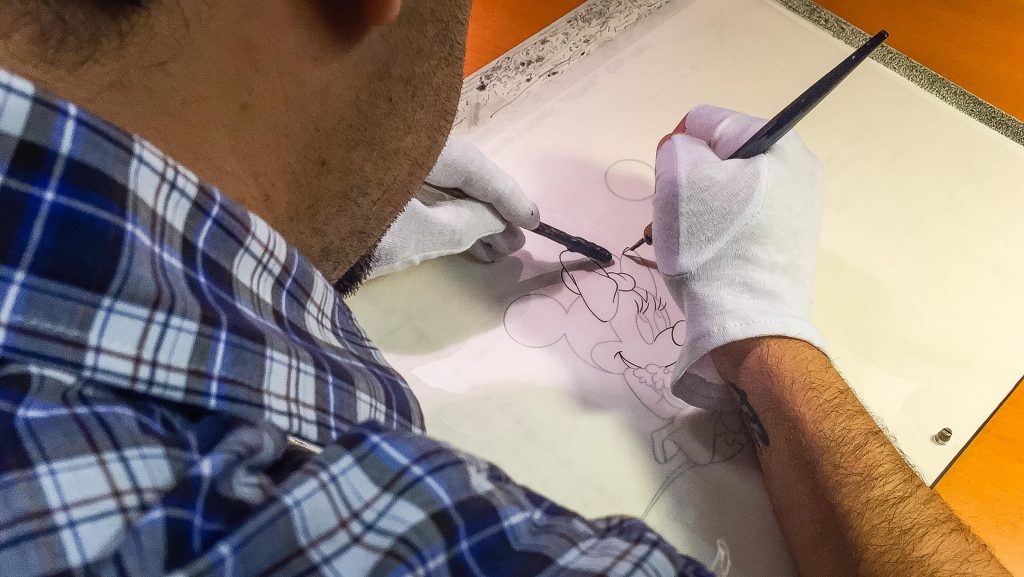 With the re-release of Snow White, and besides your recent interviews, how has this created exposure to your department?

Worldwide there are about 100,000 employees with Disney and the work we produce is sold exclusively to them. I would say 1-2% of those employees know what we do. Little by little my boss is working on advertising through other venues. Our database is slowly growing. A recent video posted (on Facebook) has gotten us a lot of exposure. It’s helping our department. Our recent Mickey Mouse cell just went on sale and right away, everyone started ordering it.

How did you end up here?

I’ve been an artist since I was a kid and I used to dream of working here at Disney. We lived really close and I used to ride my bike around the lot and imagine myself working here as an artist. Not necessarily to be in animation, but I ended up working in a department that produces animation art. This is what I like!  I like creating art that gets displayed in an art gallery or museum. And I ended up here.

You accomplished your dream.

Do you relate to any Disney character? And why?

So you’re a mouse?

Everything you’re working on sounds really interesting! And with your son possibly working here… it can become the Pelayo ink and paint department! What is next for Antonio?

The cool part about all this too is, Disney is coming out with a Day of the Dead film. It’s titled Coco and its set to come out in next year or in 2018. One of the main guys knows I produce El Velorio and when we had a meeting I was wearing my t-shirt and he asked me “What’s that?” I then told him about my idea to collaborate with Pixar on an event here on the  Disney lot—I’ll bring face painters, live painters and we can screen Coco here—and he loved it!

That’s another dream of mine. I’ve been dreaming of collaborating with Disney on one of my events. Day of the Dead is perfect!

Maybe even a story of El Velorio?

Yes. That sparked up the idea of doing El Velorio at Disneyland. That’s also in the talks—there’s a little Day of the Dead section at Disneyland, so that would be amazing. I actually produced El Velorio with no budget, and along the way we started selling tickets, getting sponsors… but every year we produce it with zero budget. Imagine if I had a budget… of a couple $100,000… the s*** that I could do!

First of all, I would like to have a big concert at the park and get huge bands! Like Ozomatli, Mana… like HUGE… Lila Downs—some of the bands that Hollywood Forever books. Have a huge Day of the Dead procession. Similar to the opening scene of Spectre, the 007 movie—something like that would be amazing!

That would be cool. Totally Disney-cultural.

California Disney already has something like that with a Mariachi. The Mariachi comes out and there’s a parade… and I think, “That’s got to be Day of the Dead.”

What else is on your mind?

For now, that’s it. Last year was so crazy—I did 4 events and I didn’t take any breaks! I’ve accumulated about 2 months’ worth of vacation. This year, I will take a vacation.

You’ve got to take a break. Rewind, unplug, and reconnect. It’s always beneficial to do that.

Last year was all work. It was good though. Every event was successful.

And this year is going to be the same too.

Esmeralda Salguero with The Multiplane Camera designed for “Snow White and the Seven Dwarfs” by Walt Disney Productions in 1937.