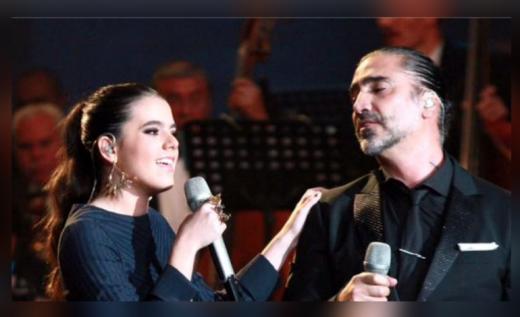 The Billboard Hall of Fame Award, which will be bestowed to Alejandro Fernandezthis year, celebrates a career that goes beyond musical performance and takes into account the incredible influence the recipient enjoys as an artist globally in multiple fields. The Billboard Hall of Fame Award is reserved for artists who have achieved worldwide recognition for their work, transcending musical genres and languages. Previous winners of the coveted award include Vicente Fernandez, Celia Cruz and Marc Anthony.

One of Mexico’s biggest international superstars of the new millennium, Alejandro Fernandez first established himself in the early ’90s as a champion of ranchera music before crossing over to the Latin pop mainstream in 1997 with the chart-topping album “Me Estoy Enamorando.” Born in 1971, in Guadalajara, Jalisco, Mexico, Fernandez is the son of icon Vicente Fernández. Beginning with his self-titled debut album in 1992, Fernandez followed in the footsteps of his father, performing traditional Mexican music. While this phase of Fernandez’ career spawned a steady series of hit singles, his career skyrocketed to new heights with the 1997 release of “Me Estoy Enamorando.” Produced by Emilio Estefan, Jr. and Kike Santander, the album marked the crossover of Fernandez into the realm of mainstream pop. The album spawned four Hot Latin Songs chart-toppers: “Si Tu Supieras,” “En el Jardin” (a duet with Gloria Estefan), “No Se Olvidar,” and “Yo Naci Para Amarte.” In 2009 he launched an ambitious project called Dos Mundos, which consisted of two separate albums, “Evolucion” and “Tradicion,” released on the same day — the former more Latin pop, the latter traditional ranchera and mariachi music. Fernandez began recording again in 2012, working in Los Angeles with producer Phil Ramone. The resulting album, titled “Confidencias,” included duets with Christina Aguilera on “Hoy Tengo Ganas de Ti,” Rod Stewart on “Nobody Knows When You’re Down and Out,” and most poetically, his father Vicente on “Me Olvide de Vivir.” Released in July 2013, the album hit the top of the charts in Mexico and Spain, and continued to chart for over a year.

Alejandro Fernandez will be joined on stage by his daughter Camila Fernandez. Born in Guadalajara, Jalisco, in 1997, Camila has always been surrounded by music, both for being part of the Fernandez family, as by choice. In September, 2014, she debuted as an artist in a Las Vegas stadium, singing alongside her father. She studied music at the Semper Altius School in Guadalajara and the Berklee School of Music in Boston.

The Billboard Latin Music Awards are the only awards that honor the most popular albums, songs, and performers in Latin music, as determined by the actual sales, radio airplay, streaming and social data that informs Billboard‘s weekly charts.