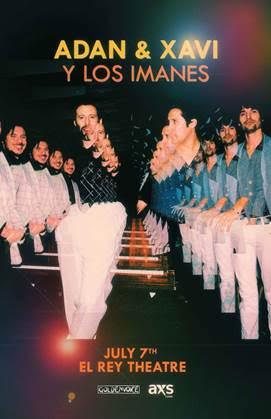 Adan Jodorowsky has explored different artistic ways to express himself throughout his life. From being a director to being an actor, composer, musician, writer and producer.

Within his busy schedule during 2015, he found time to star in and write the music for the new Alejandro Jodorowsky film “Poesía Sin Fin,” a movie that will see its release at the 2016 Cannes Film festival.

He also produced, for the second time, León Larregui’s (Zoé’s lead singer) solo album and still had time to manage a collaboration with King Kahn while finishing the recording of his new studio album, one that will give life to a new character in his life, a character that this time will be none other than himself; Adan Jodorowsky, leaving behind a period of his life that was known as the Adanowsky trilogy: El Ídolo, Amador y Ada.

Adanowsky fare welled from himself through a Latin America tour that saw him go from Mexico, Colombia, Ecuador, Argentina and Chile.

Now with Adan & Xavi y Los Imanes, Adan presents himself with a new formation. Adan & Xavi y Los Imanes is a collaborative album between Adan & Xavier Polycarpe, leader of the Paris based band Gush. Their 10 song LP is a dusky and beautiful exploration of mutual appreciation and mutual heartache, with both Adan and Xavi inspiring one another to new artistic heights. A fresh start for both, this is Xavi’s first musical endeavor outside of Gush and Adan’s first project under his own name since putting his pseudonymous alter ego Adanowsky to rest. Sung in English and Spanish, Adan & Xavi sounds rich and raw, delivering performances reminiscent of Harry Nilsson, Badfinger and the guitar work of George Harrison.

This project made its live debut throughout Mexico and Costa Rica, and will soon be followed by their first US tour ever.

This July 13th, they will find themselves opening their tour in Los Angeles at the mythical El Rey theatre, presented by Goldenvoice.