The 23rd annual Recent Spanish Cinema Series will bring the most outstanding recent Spanish films to the Egyptian Theatre in Los Angeles, October 19-22, 2017.

Presented by The Spanish Institute of Cinematography and Audiovisual Arts (ICAA), a part of the Ministry of Education, Culture and Sports, The American Cinematheque and EGEDA U.S. 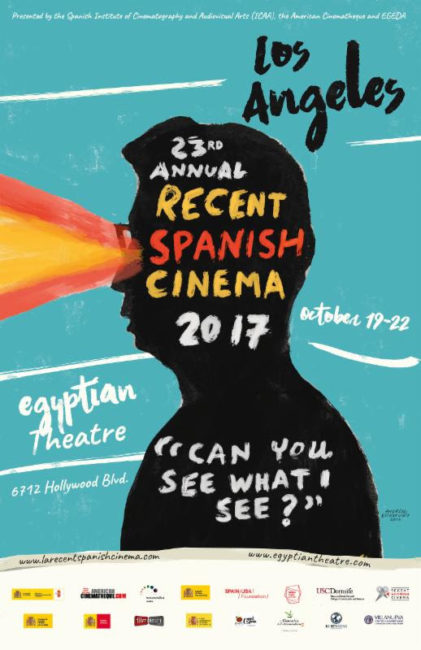 The official poster was designed by ANDREU BUENAFUENTE, one of the biggest stars in Spanish TV with a huge following thanks to his 20 year work as a late night television show host. Buenafuente currently hosts the most watched late night show in Spain Late Motiv and has hosted the Goya Awards in Spain several times.

As a multitalented artist, painting is one of his passions.  As a painter, he has collaborated with publications like The New York Times and with projects like UNICEF but this is his debut creating a poster for a film series.  In addition to his TV career he has also starred in Spanish box office hits such as the Torrente saga but Party Town constitutes his debut as a leading actor. The movie premiered in the U.S. at The Spanish series in Los Angeles last year.